Many risk 'a nasty surprise' by hiding Christmas gifts in cars

More than half of people who hide presents in their cars do not take extra precautions to protect them from being stolen, a survey has found. 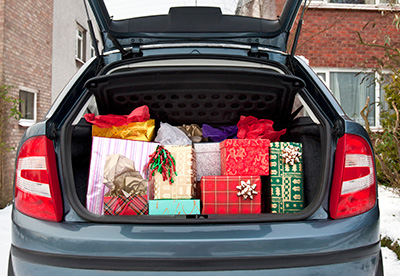 Based on a poll of 3,079 adults, the survey said one in six (16%) hid Christmas gifts in their cars. Of those, 58% admitted to not taking an extra step to protect the content in the car from theft, such as contacting their insurer to increase the level of cover.

uSwitch, which carried out the survey, warned this could potentially lead to "dire consequences" and said checking with their insurer should be on their to-do list. The majority (76.1%) of respondents had never checked if their policies provided extra cover for gifts over Christmas.

Rod Jones, insurance expert at uSwitch.com, says: "Keeping presents hidden from the prying eyes of loved ones can be like a game of cat and mouse. But while hiding gifts in the car boot or the glove box might seem like the perfect plan, you could be leaving yourself open to a nasty surprise on Christmas morning in the event of a theft."

Toys were the most popular gifts to hide in cars, with 49% respondents mentioning them, followed by clothing (43%) and alcohol (29%). The survey also found that two-thirds (66%) said they would hide their presents from partners.

At home, wardrobes were the number one spot for hiding gifts, as cited by 65% of respondents. Under the bed (32%) and in the loft (30%) were also favourite places for keeping gifts secretly.

However, 64% of had never checked their home insurance policy to see if it provided extra cover over the Christmas period.

Jones added: "It might not be top of your festive to-do list, but it's important to contact your insurer and make sure your car insurance policy covers any additional contents. This means if the worst should happen and the Grinch comes to steal Christmas, you'll have the right cover in place to make amends."