Torrential rainfall in India and Sri Lanka has caused $3bn (£1.98bn) of economic losses, with insurance payouts estimated at around £300m (£198m), according to Impact Forecasting. 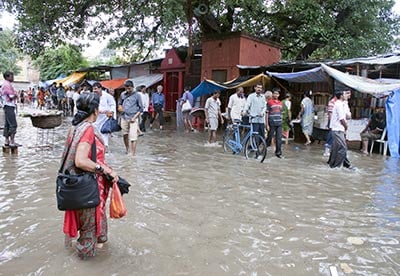 The reinsurer's latest global catastrophe report said that in November and early December, portions of Tamil Nadu and Andhra Pradesh states in India and Sri Lanka had been "heavily impacted" by floods.

The report highlighted "severe impacts" to agriculture and infrastructure as "rivers swelled into both rural and urban areas". The Chennai metropolitan region was particularly affected by the event. The damage caused more than 386 deaths.

"Risk assessment can play a major role in awareness and insurance in mitigating the financial hardships," he said.

"The large gap between the economic and insured loss from the Chennai flood event further emphasises the need for greater insurance penetration in large industrialized cities in Asia. This will become even more important as Asian megacities continue to grow and the risk of major urban flood events increases."

Meanwhile, in the UK, the government has announced £51m will be made available to support household and businesses affected by Storm Desmond last weekend.

The disaster affected Cumbria, parts of Lancashire and the Scottish Borders. According to Cumbria Police, areas such as Appleby, Carlisle, Central Lakes, Cockermouth, Eden, Kendal, Keswick, Maryport and Workington experienced flooding which caused damage to more than 6,000 properties.

The Association of British Insurers said firms had set out six key stages in getting those affected by flooding back into their homes and businesses as soon as possible.

These include insurers finding temporary accommodation, assessing damage, cleaning and stripping out once waters receded, processes in disinfecting and drying out, repairs and reconstruction and helping people moving back in their accommodation.

PwC initially estimated insurers would pay out between £250m and £350m for the storm.