Insurers faced with payouts of up to £325m for Storm Desmond

Insured losses caused by Storm Desmond have been estimated at between £250m-£325m, while the impact to the economy could be between £400m and £500m, according to PwC. 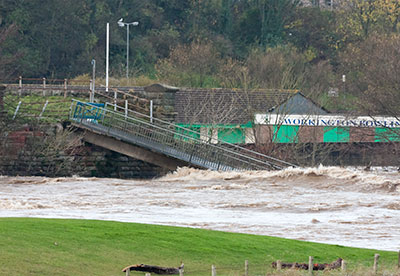 However, Mohammad Khan, the firm's head of general insurance, warned these were initial estimates and if the storm continued, damage and costs "could be significantly worse".

He added: "Any additional rainfall - even 1cm-2cm - could cause flash flooding in rain affected areas as the ground is already saturated with water. This could compound the damage that has already been caused by Storm Desmond."

Khan expected the frequency of extreme weather events affecting households in the UK to increase over time.

"What Storm Desmond highlights is that we need to keep investing in defences against natural catastrophes to minimise the damage that can be caused by extreme weather events," he said.

His colleague Jon Williams, partner in sustainability and climate change, said the floods caused by the storm brought into "sharp focus" the need for a durable climate deal in the 2015 Paris Climate Conference, taking place this week.

Williams said: "Severe and unpredictable weather is likely to become far more frequent as our climate changes, and the economic and social costs will far outweigh the investment needed in flood protection infrastructure."

The Association of British Insurers (ABI) moved quickly to reassure the public that the industry would help homeowners and businesses affected by the storm.

This included arranging and paying for temporary alternative accommodation or trading premises, drafting in any additional claims, and advice to customers whose properties have been flooded.

Insurers also sent representatives to "badly flooded areas" over the weekend, and claims handlers were sent to visit flooded customers to assess the damage and get claims moving, according to the organisation. It also said the industry was making interim emergency payments to support affected customers.

James Dalton, director, general insurance policy at the ABI, said: "Insurers are geared up for events like this and have mobilised their contingency plans to help customers through this stressful time."

According to the Met Office, the storm affected several parts of the UK, especially in Cumbria and the Scottish Borders, on 5 and 6 December. The Environment Agency confirmed ongoing flooding across Cumbria and parts of Lancashire, and would issue further flood warnings as necessary.

Brendan McCafferty, CEO of Flood Re, said: "I want to reassure homeowners that Flood Re is on track to start accepting policies from insurers next April. This will give people access to more affordable flood insurance ensuring that the insurance safety net continues to be in place for the future, even if your property is at a high risk of flooding."