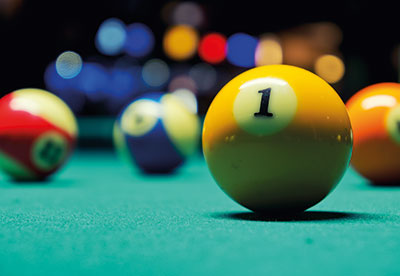 The SIAS pool tournament was held on Thursday 22 October in Victoria. Over 70 people gathered to compete for the title of best pool-playing actuary in London.

SIAS had been given the entire basement of Rileys, allowing each team to have a guaranteed three games, regardless of their pool skills. The first round was a group stage, where each team competed to become table-winner and proceed to the next. The night became more intense as the knockout stage followed, with each player in deep contemplation for several minutes before taking a shot. One tiny mistake could mean the end of the tournament for their team.

For those eliminated at the group stage, this did not mean the end of the night, as many adjourned to the bar and enjoyed a variety of burgers and friendly games of pool.

As the group of best 'pool-playing actuaries' was slowly whittled down, we entered the cup final. Many congratulations to Paul Murphy and Eddy Martin from PwC, who were crowned this year's pool champions after an intense best-of-three final game.
This article appeared in our December 2015 issue of The Actuary.
Click here to view this issue
Filed in:
12