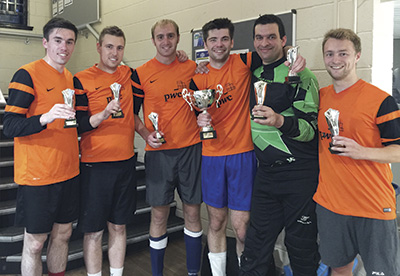 The tournament took the format of a round robin, with the top two teams facing off in a final. The tournament's strugglers were Towers Watson, who claimed to be unable to field a full-strength team. Their opening match saw them receive a resounding 7-3 beating from PwC, and things didn't get much better for them.

First Actuarial occupied fourth place. After a heavy loss to KPMG in their opening fixture, "There's only one FA" grew into the tournament and produced solid football throughout. The solid approach nearly paid dividends against PwC, who only just managed to draw the match thanks to a last-minute equaliser.

Buck Consultants were playing in their first tournament after years of absence. They took a game to settle but quickly became an effective outfit, largely built around their suspiciously talented striker, who was able to walk the ball into the net on a number of occasions. The team were within touching distance of the final in their last group match, only to be denied by Towers Watson, who in a last-ditch effort to reclaim some pride produced the shock of the tournament to win 3-2.

The reigning NWAS champions, KPMG had plenty of firepower throughout the tournament; however, on too many occasions, this was matched by their leaky defence. The holders scraped through to the final, thanks to the aforementioned meltdown of Buck Consultants.

A number of new (and some old) faces provided PwC with an improved team aiming to reclaim the title lost in 2013. With the exception of a small wobble against First Actuarial, PwC were impressive, winning the group stage by a four-point margin. The final saw PwC take on a tiring KPMG side, who struggled to keep up with PwC's high level of intensity. PwC took the final with a comfortable 3-1 victory.
See highlights at: on.fb.me/1MTo8hl
This article appeared in our November 2015 issue of The Actuary.
Click here to view this issue
Filed in
11