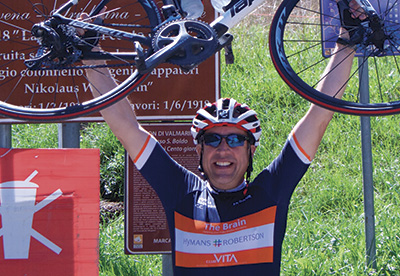 As birthday celebrations go, this is one of the more eccentric. Or should that be energetic? Conventional wisdom has it that 50 is the age to join a golf club. However, Douglas Anderson, a partner at Hymans Robertson, is no follower of convention. He is attempting to cycle up 50 mountain passes during 2015. So far, he has bagged 43, some of them in his native Scotland but most in the Alps.
As his sole qualifying criterion seems to be that they must be new to him, he could have selected a gentle portfolio. Instead, he has opted for some big beasts, clocking up 70,000 metres of altitude - roughly eight Everests.

Anderson's 43 include a binge of 20 cols in one amazing week in September. He cycled from Geneva to Venice, as part of seven-day race called the Haute Route, over monster passes like the Stelvio, Furkapass and the Gavia. He explains: "There were really two races, lots of finely honed bodies chasing for glory at the front, and a merry gang at the rear trying to stay just ahead of the broom wagon. I was happy at the back!".

He still has seven to go. "I've looked out my thermals and am heading back to the Alps to cycle around Mont Blanc."

Anderson is the founder of Club Vita. He is raising money for Alzheimer's Research UK.

Follow his progress at uk.virginmoneygiving.com/team/50_cols_for_50
This article appeared in our November 2015 issue of The Actuary.
Click here to view this issue
Filed in
11