The UK population is estimated to increase by 9.7 million to 74.3 million in mid-2039, according to official figures. 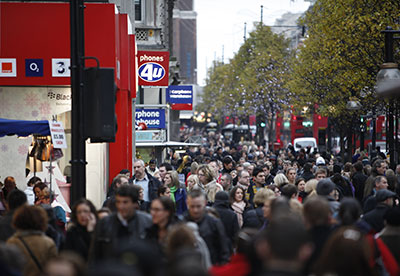 The Office for National Statistics (ONS) said 51% of the increase would be a result of positive net migration, while a natural increase - more births than deaths - would account for the remaining 49% of growth.

ONS said the fast growth rate was a result of direct and "indirect" migration, defined as instances where women who were born overseas give birth after migrating to the UK.

Guy Goodwin, ONS social and analysis director, said: "Growth will be at a faster rate than we have seen previously, largely due to the direct impact of international migration and the indirect impact of immigration."

The ONS there would be a "marked increase in the population at older ages" in 2039, largely attributable to the large number of the population who were born in the 1960s moving into the higher age groups.

The statistics also showed there would be 370 people of pensionable age for every thousand people of working age in 2039, up from 310 in 2014.

Goodwin said: "The population will also be older as those born shortly after the Second World War and during the 1960s 'baby boom' reach the oldest and pensionable ages respectively. The number of people of age 80 or over will more than double over the next 25 years."

This article appeared in our October 2015 issue of The Actuary.
Click here to view this issue
Filed in
10
Topics
Environment