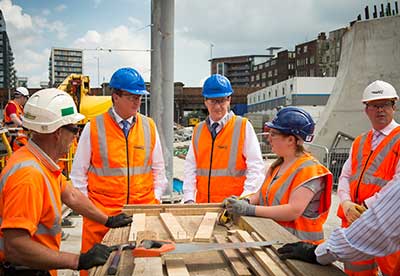 Speaking at the Conservative Party conference in Manchester, the chancellor said the move would reduce costs and help invest in infrastructure across regions.

Osborne said: "At the moment, we have 89 different local government pension funds with 89 sets of fees and costs. It's expensive and they invest little or nothing in our infrastructure.

"So I can tell you today we're going to work with councils to create instead half a dozen British wealth funds spread across the country."

However, unions opposed the proposals and said pensions should not be used as "politicians' playthings".

The government said small local pension funds lacked "the expertise to invest in infrastructure" and pooling the 89 local authority pension funds into six wealth funds would "reduce costs, saving the beneficiaries of the schemes millions of pounds every year". It would also allow larger sums being invested in infrastructure.

However, the GMB trade union opposed the idea saying the reason LGPS assets were not invested in infrastructure projects was because risks outweighed returns. It said pension savings should not be used as "politician's playthings".

"Mr Osborne needs to remember these are council workers' pension savings that need to be invested as efficiently as possible, they are not to be used as politicians' playthings."

Unison said if the move meant greater returns for pensions it should be welcomed, but if it exposed them to "casino-style risk" it "wouldn't be acceptable".

Unison general secretary Dave Prentis said: "The collapse of investment in infrastructure is entirely down to the inability of the banks to lend, and of the government's failure to see public investment as a means of growing the economy again.

"The chancellor shouldn't use our pension funds as a convenient way of making up for the infrastructure investment that no longer happens. Nor should they be used as replacement capital for the government's privatisation programmes."

This article appeared in our October 2015 issue of The Actuary.
Click here to view this issue
Filed in:
10
Topics:
Investment