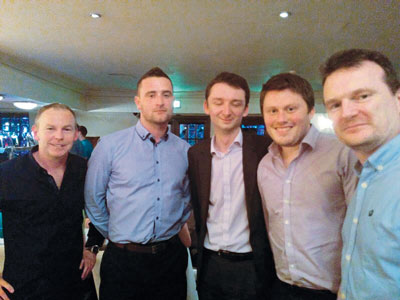 The third event of the year for the Student Society of Actuaries in Ireland was held on 18 June at Dicey's on Harcourt Street, Dublin. Over 120 students attended the annual table quiz to compete against each other for the winning prize of 50 One-4-All vouchers per team member, kindly donated by Acumen Resources. The teams placing second and third were rewarded with 20 One-4-All vouchers and bottles of wine respectively.

The 30 teams competing were required to test their knowledge across eight rounds covering geography, history, sport, entertainment, art and literature, science, current affairs and lyrics and quotations. Additionally, there was a symbols and brainteaser round. In a very close competition with only one point separating the top three teams, the winning team, 'The Product Governators', finished with 77 points. They are pictured with Paul Walsh from Acumen (above) who presented the prizes. There was a separate prize for best team name, which was awarded to 'Pain in the ORSA'.

The strong turnout contributed to a tremendous atmosphere. Thanks to Dicey's for running the event, Acumen Resources for their sponsorship, and to all who attended. The student committee would also like to wish good luck to those sitting exams in October.

This article appeared in our October 2015 issue of The Actuary.
Click here to view this issue
Filed in:
10