Bouncy castles and trampolines biggest cause of injuries to children

Bouncy castles and trampolines are the most common cause of personal injury to children, according to an insurer. 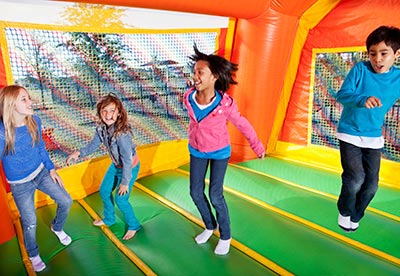 Direct Line said bouncy castles and trampolines accounted for 9% of child injuries, followed by slides and water slides (7%) and climbing frames and trees (6%).

Based on internal data, Direct Line said it had seen claims ranging from £20,000 to £100,000 for children getting injured on bouncy castles, trampolines and rope swings.

In a separate poll of 2,003 UK adults, the insurer said 16% of respondents had experienced a child injure themselves on their property in the last 12 months. The survey found 82% of accidents took place while the children were under supervision.

The insurer identified six as "the most injurious age", with 20% of injuries involving children of this age. Five-year-olds and seven-year-olds were the next age groups most likely to get injured, with both accounting for 14% of incidents.

According to Direct Line, injury rates fall as children grow up, with 6% of cases involving 10-year-olds and 3% affecting 12-year-olds.

Katie Lomas, head of Direct Line home insurance, said: "Children are no strangers to bumps and bruises and get up to all kinds of mischief which often involves climbing or jumping off things.

"With this in mind, it is worth noting that if a child is injured on your property it could land you in hot water, potentially costing thousands of pounds in legal fees. It's not about banning fun; it's all about ensuring that entertaining children doesn't become a legal nightmare."