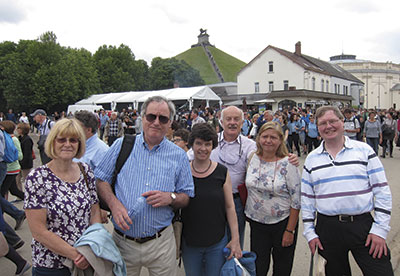 In late June, to mark the 200th anniversary of the battle of Waterloo, 10 members of the Waterloo dining club and their spouses travelled to the battle site in present-day Belgium. The club's name comes from the fact that its first meeting was in the Waterloo Room of the Institute of Directors, rather than directly inspired by the battle.

For the anniversary there was a large re-enactment on the original fields by over 7,000 volunteers from all over the world. It was held over three days to allow for the different phases of the encounter and was watched by more than 100,000 people each day.

We were there for the final enactment of the evening of the battle when the British and Prussian allies finally defeated Napoleon after a long and bloody day's fighting. The re-enactment with canons firing and all their smoke authentically portrayed how little either army's leaders would have seen of the battle. Unlike the actual day of the battle, which was fought in a quagmire, the rain just held off until the end of the re-enactment.

An enjoyable and sociable weekend was had by all. The Waterloo 200th anniversary beer was particularly popular with club members.

The Waterloo Club is a dining club for actuaries and others working in financial services. The club meets in restaurants about nine times a year for good food, good drink and good company, and also arranges social events, such as the trip to Waterloo, and wine tastings.

If anyone is interested in finding out more about the club, please contact me at: [email protected]