Storm surge can often be more damaging than high wind speeds, according to a report into the lessons learned by the insurance sector from Hurricane Katrina. 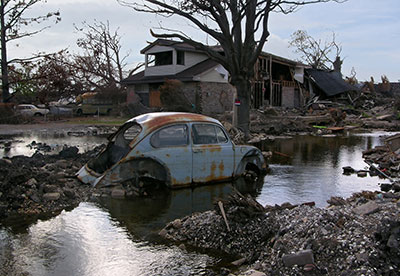 The report by Allianz Global Corporate & Specialty (AGCS) said that prior to Katrina, storm surge, defined as an abnormal rise in the level of seawater generated by a storm, was underestimated in risk modelling.

Andrew Higgins, technical manager, Americas, Allianz Risk Consulting, said: "Storm surge modelling prior to Katrina essentially assumed that the height of the storm surge was a function of the maximum sustained winds. We have learned that in addition to wind speed, the physical size of the hurricane can affect the storm surge."

AGCS said Katrina remained "the largest-ever windstorm loss" and "the costliest disaster in the history of the global insurance industry". The hurricane caused $125bn of damage, including more than $60bn (£38bn) in insured losses.

According to the report, the flooding caused by Katrina showed the condition of the levee system in the US was "very poor". The hurricane also highlighted the need for better wind damage protection.

AGCS added that the importance of business continuity after the catastrophe, knowing exactly what is covered by insurance ahead of a windstorm and the unexpected impact of demand surge were other key lessons learned from Katrina.

The catastrophe led to rising prices and supply shortages of building materials, thus increasing the importation of Chinese drywall.

"This led to a significant increase in the importation of defective drywall manufactured in China, subsequently resulting in a number of environmental issues and eventual litigation," said the report.

Chris Fischer Hirs, CEO at AGCS, said: "Katrina will always be remembered as an extraordinary natural disaster that foremost affected millions of individuals and businesses, but also left an indelible impact on the global insurance industry."

The report also found the US was the top loss location for windstorms, accounting for 49% of global claims analysed. There were 208 claims in the country out of a global total of 426 windstorm claims between 2009 and 2013. Europe came second with 19% of windstorm claims and Asia accounted for 6%.

AGCS's research was based on 11,427 corporate claims across all lines of businesses in 148 countries, including fire, earthquake and flood.

AGCS warned losses from Asia were expected to rise in the future, driven by population growth and expansion of industries in tropical storm areas, which could intensify storm impacts. It said Asia would account for 80% of the top-10 most exposed locations to windstorms in 2070.