Insured losses from a series of explosions in the Chinese city of Tianjin on 12 August could exceed $1.5bn (£955m), according to Fitch Ratings. 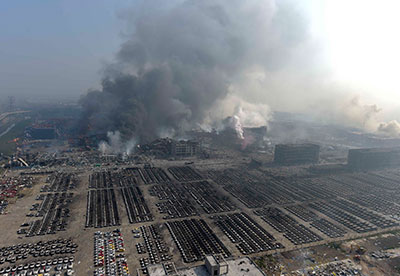 A high insurance penetration rate in the area meant firms could face "one of the most costly catastrophe claims" in the past few years, said the credit rating agency. It expected further claims to surge in the next few weeks.

Fitch said claims from the disaster could affect the financial performance of some of the regional players but that it's too early to determine the exact impact on the credit strength of the Chinese insurance sector as a whole.

Fitch said non-life premiums from the city were 11bn yuan (£1.09bn). The agency explained if insured losses came in at the high end of its $1bn to $1.5bn estimate, this would represent about 88% of total premiums written in Tianjin.

Fitch estimated major non-life firms would pass on 10% to 15% of claims to reinsurers, which would mitigate the impact on the sector.

"The majority of claims will come from motor, cargo, liability and property insurance. However, medical and life insurance claims are also likely to be substantial," said Fitch.

According to the agency, victims of death and injuries are covered by a government-backed accident plan for Tianjin region, and will get payments in addition to their own medical and life insurance policies. Each injured person who is insured by the government can claim compensation of between 20,000 yuan (£1,991) and 35,000 yuan (£3,485), and 50,000 yuan (£4,979) in the event of death.