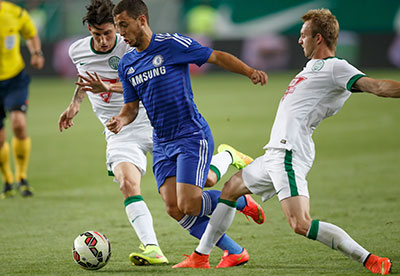 The club hopes to encourage more women to apply for the apprenticeship, which will partially use football coaching as a way of developing leadership skills for careers in the financial sector. According to Chelsea, applications from young men currently outnumber those from women by five to one.

Chelsea striker Eni Aluko said she hoped the recent women's world cup would inspire as many young women as possible to apply for the apprenticeship.

"The world cup was a fantastic opportunity to raise the profile of the women's game and we hope it will also encourage young women to strive for success in other areas," she said. "Football coaching is only a small part of Chelsea's new accounting apprenticeship, which involves studying for an accounts qualification and a paid work-placement with a top employer."

The scheme was developed by social mobility and employability charity Leadership Through Sport & Business (LTSB), which aims to combine sport and business to help young people from deprived backgrounds find jobs. The charity runs similar apprenticeships with other football clubs including West Ham and Leyton Orient.

Students on the Chelsea apprenticeship will study through Westminster Kingsway College.

The programme, which starts in September 2015, is open to people aged 16-18 with five GCSEs, including English and maths.

This article appeared in our July 2015 issue of The Actuary.
Click here to view this issue
Filed in:
07
Topics:
Professional