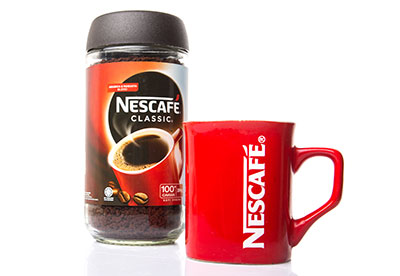 The food giant said the proposal would affect 7,600 employees in the UK, switching them to a defined contribution scheme.

Nestlé said the costs of providing a DB scheme "continued to increase substantially in recent years" and it was facing a pension black hole of £850m.

In a joint statement, unions Unite and GMB said the move could be seen by the workforce as "act of betrayal" and urged the firm to think again.

Stuart Fegan, GMB national officer, said: "Over 7,600 Nestlé workers in the UK which these proposals will affect will wonder why a company such as Nestlé generating significant profit here and in other world markets can justify such detrimental plans. Particularly as these proposals directly affect those Nestlé workers who manufacture the products that make Nestlé the leading world food manufacturer.

"We urge Nestlé to think again on these proposals as we fear that the UK workforce will not accept these changes willingly."

Fegan warned there would be industrial action if the firm decided to go ahead with the change.

"Strike action, with all its consequences for Nestlé's corporate brand if these proposals are implemented, looms large across Nestlé in the UK at present," he said.

Dame Fiona Kendrick, CEO and chairman of Nestlé UK and Ireland said: "We realise that these proposed changes will cause concern for employees who are building up defined pension benefits in the Nestlé UK Pension Fund, or are eligible to do so. We are very sorry that we have to propose these changes but under the circumstances we believe it is the right option."

Nestlé introduced the option of a DC scheme in 2010 while continuing to offer a DB scheme. The company believed by offering a choice of schemes it could continue with the DB option in the future.

Nestlé said: "It has therefore become clear that the arrangements we introduced in 2010 are not sustainable after all."

Under the proposal the DB scheme will close to new entrants from 2016 and from 2017 existing DB pension holders will have to switch schemes.

Julia Long, Unite national officer, said: "Many loyal workers will feel led up the garden path and see these changes as an act of betrayal by Nestlé. Five years ago they agreed to pension changes in good faith on the understanding that their pension would be secure for the future.

"Now Nestlé is tearing up their contracts with their future with many workers facing being worse off in retirement. We will not stand by and let that happen and would urge Nestlé to think again and honour its past promises."