Don't mind running it for the kids 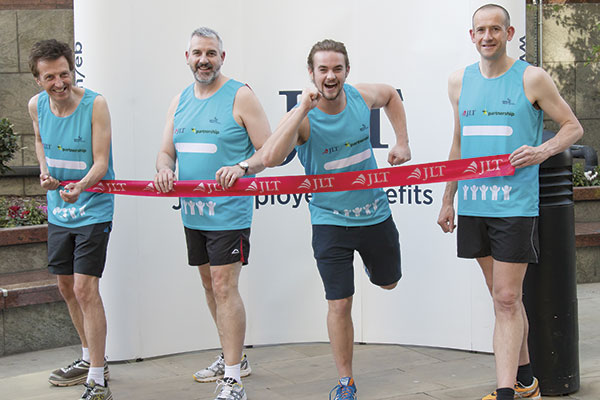 This year, Kenny Tindall and I, from JLT, teamed up with Paul Glynn and Sam Loveday of Partnership Assurance to run in the London marathon and raise money for the Brathay Trust - a charity supporting vulnerable and disadvantaged children.

Setting out early on the Sunday morning I joined thousands of people making their way to Greenwich Park for the start of this great event. Trains that would normally be quite empty were thronged with happy excited faces, all wondering whether months of hard training would end in triumph or disaster.

The weather was kind. It was cool and the threatened rain did not materialise. But as we hung around for ages at the start, body and muscles slowly began to seize up as the cold inactivity started to take its toll. Then, at last, with shouts and screams and much excitement we were off - or at least we were moving, as it would take me nearly 15 minutes to get to the starting line.

It was then 26-and-a-half miles of noise and rich London colour, with loud music, live bands and hoards of people, young and old, lining the streets. There were crazy fancy-dress costumes everywhere - I was still overtaking telephone boxes, strawberries, rhinos and costumed superheroes at mile 20.

Yes, those last few miles hurt, but we were swept along by the noise and great party atmosphere. Running around the Cutty Sark, through Canary Wharf and over Tower Bridge was great fun, but those last few miles along the Victoria Embankment being cheered on by complete strangers, past Big Ben and the Houses of Parliament and then finally sweeping round past Buckingham Palace and finishing down The Mall were magic.

Emotions were high at the finish. We had achieved our goals. Best of all, millions had been raised for charity. Our team could be justly proud of a fabulous total of over £15,000, which will go a long way to support the great people at Brathay - and a big thank you is owed to our many supporters. It was an amazing day.