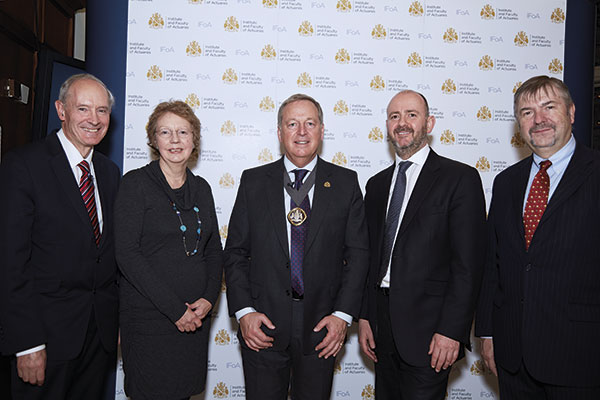 The IFoA Annual Awards Dinner to honour Europe-based prize winners took place at Staple Inn Hall on 26 March. Hosted by president Nick Salter, the dinner is now in its second year and celebrates success and excellence in academic achievement and leading research with prizes, awards and medals overseen by the Awards Committee. Suzanne Vaughan, Council member, commented: "This was my first opportunity to attend an evening event like this at Staple Inn Hall and I was impressed. It was clear the guests from my table felt the same."

This year, our prize-winners and their guests were joined by four of the six Honorary Fellows elected in 2014, Dr Peter England, professor Carol Jagger, Sir Philip Mawer and professor Karel Van Hulle. Sir Philip also delivered the after-dinner speech, which was both entertaining and inspiring.

Other prizes awarded on the night were the Brian Hey prize, which went to the Towards the Optimal Reserving Process Working Party, and the Peter Clark prize for best paper, which was awarded to the IFoA Extreme Events Working Party.

Members are reminded that they have the ability to nominate a paper for the Peter Clark prize; details can be found on the IFoA website (www.actuaries.org.uk). The closing date for nominations is 12 June 2015.