Insurance firm Aviva has people out on the ground to assess the impact of the earthquake that took place in Kent this morning. 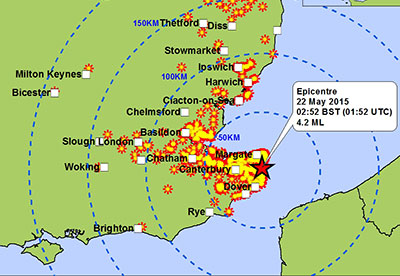 The firm said it was assessing the impact of the quake and ensuring customers' safety.

John Franklin, media relations manager at Aviva, said: "We've actually got people in the area, they are on the ground there, they are having a look at what the impact is likely to be. They are taking customers' details down, to make sure people are all right. We are being proactive with it."

But the firm felt the earthquake would be unlikely to cause a large number of claims.

Franklin said: "We haven't actually had any claims coming yet. We're not expecting huge volumes. As the BBC says, there is no evidence of structural or property damage. At this stage we are not expecting too much in really."

"There doesn't appear to be any damage at all, which is to be expected for such a small tremor," he said.

"The UK sees an earthquake of this size about once every two or three years, and about 200 annually, though you don't actually feel most of them. For context, the recent Nepal earthquake was 5,000 times bigger and released 354,813 times more energy."

According to the British Geological Survey (BGS), the earthquake occurred this morning at 2:52am, with the epicentre in Ramsgate, Kent. BGS received more than 1,000 "felt reports" from across the country in an online survey of members of the public.

It said almost all the reports indicated people were awoken from their sleep. More than half described the shaking strength and the sound strength of the earthquake to be "moderate".

More than two-thirds of the reports said that "windows rattled" and one third reported "furniture shaking".

This article appeared in our May 2015 issue of The Actuary.
Click here to view this issue
Filed in
05
Topics
Environment