A fully probabilistic flood model has been developed to help insurers and reinsurers better underwrite and manage these risks in Canada. 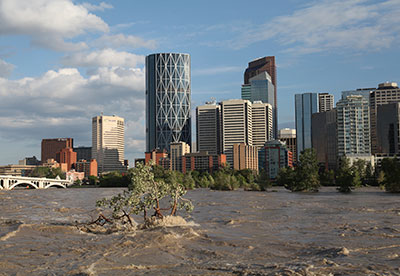 Impact Forecasting, who developed the model, said it offered a "complete view of Canadian flood risk" using underwriting data that "drills down to individual locations while helping insurers understand the impact of accumulations on their portfolios and fulfilling regulatory and rating agency requirements".

The model also provides access to potential levels of damage based on loss data from the firm's other country-specific flood models and claim information from Canadian clients.

The tool was developed after a series of floods hit Calgary and Toronto in summer 2013. Impact forecasting said 2013 was the "costliest year" in the Canadian insurance industry's history at nearly $3bn (£1.9bn). Economic losses in Calgary were $5.2bn (£3.3bn) while insurers paid out $1.7bn (£1bn). In Toronto, the floods caused $1.7bn of economic losses and cost insurers $860m (£548m).

David Sloan, president and CEO at Aon Benfield Canada, said: "While Southern Alberta and Toronto have diligently been rebuilding their communities following the staggering floods of 2013, our in-house catastrophe experts from across the globe have focused their efforts to develop a flood model for Canada from the ground up.

"Based on its release, I am thrilled that we are able to provide a high-quality tool that will hopefully transform how Canadian insurers underwrite and manage their flood risks both from a location level and aggregate accumulation perspective."

This article appeared in our May 2015 issue of The Actuary.
Click here to view this issue
Filed in
05
Topics
Reinsurance