Economic losses of Nepal earthquake equal to 25% of nation's GDP

The damage caused by the earthquake in Nepal has been estimated at a minimum of $5bn (£3.2bn), which is a quarter of the countrys GDP, says Impact Forecasting. 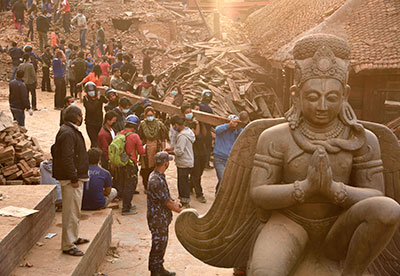 The reinsurance broker said the earthquake, which affected Nepal, India, China and Bangladesh on 25 April, killed more than 10,000 people, caused more than 15,000 injuries and damaged more than 700,000 homes and other structures.

Adityam Krovvidi, head of Impact Forecasting Asia Pacific, said the region experienced an earthquake in 1934, so a major event was not unexpected.

He said: "While the level of damage and casualties was enormous, the seismological magnitude of the event in the Indo Nepal region was not unexpected. Scientists have been warning about a major event resulting from the 'central seismic gap' in the Himalayan fault system since the 1934 event.

"Unfortunately, for earthquake peril, timing is always the greatest unknown factor. The vulnerability of buildings and structures in Nepal poised a significant risk given the absence of good seismic code history and implementation practice."

In the US, at least five separate cases of severe thunderstorms affected the central and eastern parts of the country. Tornadoes, straight-line winds and flash flooding affected areas such as the Plains, Midwest, Southeast and Mid-Atlantic. Total combined losses cost insurers $2bn (£1.3bn), while economic losses were "even higher".

Meanwhile, Chile's Calbuco volcano erupted three times and led to the evacuation of more than 6,500 residents. Impact Forecasting said: "The agricultural industry suffered substantial losses as a thick layer of ash blanketed the flanks of the volcano." Economic losses of the eruptions were expected to reach up to $600m (£389m).