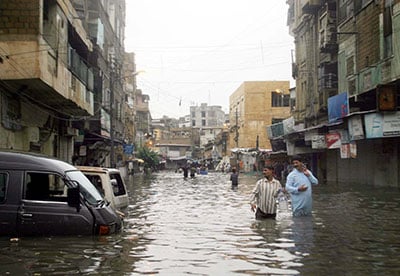 In a report published by BSI to analyse threats, risks and trends in supply chain in 2014, the costliest natural catastrophe in 2014 was flooding in Pakistan and India with $11.9bn (£7.8bn) of losses, followed by Cyclone Hudhud in India and Nepal with $9.35bn (£6.18bn) worth of business damage, severe winter weather in Japan with $6.7bn (£4.4bn) of losses and drought in Brazil which caused $4.88bn of damage.

The 2014 SCREEN Global Intelligence Report said in Europe strikes caused $1.5bn (£991m) of direct losses to business. The four largest strikes in Europe were general strikes in Belgium, train strikes in Germany and airline strikes in France and Germany.

In Asia, two fifths (40%) of top exporters were rated at "high" or "severe high" risk of environmental violations. In December 2014 a Chinese court ordered six firms to pay fines totalling $26bn (£17bn) for dumping acid waste into waterways. BSI said the penalty was the largest environmental fine ever imposed by a Chinese court.

Another supply chain disruption was cargo theft, which caused $23bn (£15bn) of losses around the world. BSI said in Germany cargo theft had become increasingly sophisticated and thieves targeted specific high-value goods such as aluminum, pharmaceuticals and machinery.

In the Middle East cargo shipments were heavily impacted by supply chain terrorism. The report said ISIS took control of many supply chain operations using a blend of traditional terrorist and "mafia-style" tactics. ISIS generated income of $3m (£1.98m) a day in autumn 2014 through its extortion and supply chain control schemes.

The report also revealed Haiti had 29% of all children between five and 14 working in "slave-like conditions". This compares to 5.8% in the Dominican Republic and 8.4% in Jamaica. BSI said governments and firms in Western Europe attempted to push supply chains to comply with social and ethical norms, but this increased the regulatory burden on organisations.

This article appeared in our April 2015 issue of The Actuary.
Click here to view this issue
Filed in
04
Topics
Global