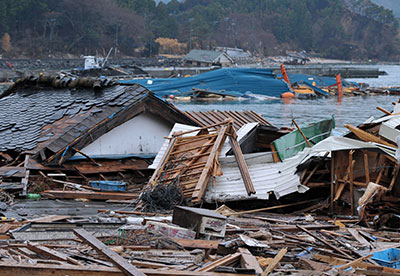 The firm said natural catastrophes had not been a major factor for rating firms in the past but "the more frequent and extreme climatic events many scientists predict could adversely affect companies' credit profiles in the future".

In a report entitled Climate Change Will Likely Test The Resilience Of Corporates' Creditworthiness To Natural Catastrophes, S&P saidthe sectors most at risk were energy, through potential direct impact on production and distribution facilities, and consumer products, through supply chain and market disruption.

Following an analysis of credit ratings over the past 10 years, S&P found 40% of cases experienced a "one-notch downgrade" - with notches being used by the agency to move a firms' rating up or down. A further 30% had a "negative outlook" that was later resolved with the rating staying the same. However, S&P added the latter firms took on average 15 months to recover sufficiently for the agency to revise its outlook to "stable".

"Katrina, in particular, was behind almost all of the cases that ended in default. The effects of Katrina were wide-ranging, from large direct losses to major supply chain disruptions and price increases across a wide variety of industries," said the report.

Tokyo Electric Power Co Inc (TEPCO), owner of the Fukushima nuclear power plant damaged by flooding from the tsunami, had its corporate rating downgraded from AA- to B+ between March and May 2011. S&P said other power companies with nuclear operations in Japan also suffered multi-notch downgrades.

The agency concluded growing exposure to extreme weather events and the increased integration of the world economy with global supply chains might worsen the impact of natural catastrophes.

It expected climate change to increase the severity and frequencies of natural catastrophes such as tropical storms, floods, droughts and earthquakes.

S&P added: "Certain risks may become difficult and costly to insure as the likelihood and cost of natural catastrophes events increases."

The report recommended that firms improve their level of disclosure about their exposure to natural catastrophes, which would "encourage them to bolster their resilience to these events and thereby aid transparency".

This article appeared in our April 2015 issue of The Actuary.
Click here to view this issue
Filed in
04
Topics
Environment