Shipping losses worldwide have declined by 50% over the past decade, but 75 ships were lost in 2014, according to study. 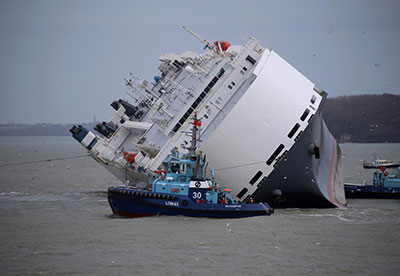 It said the British Isles, North Sea, English Channel and Bay of Biscay had seen the most shipping incidents since 2005, with nearly one in five (18%) of all incidents occurring in this region. Such incidents include machinery damage and hull damage.

The report Safety and Shipping Review 2015 said despite the decline, cyber risks were a growing concern in the shipping sector, while the increasing size of container ships meant potential losses exceeded $1bn (£670m).

The firm said although the number of known cyber crime incidents was low, more than 90% of global trade was estimated to be carried by sea, so "much is at stake, with an increasing number of potential loss scenarios". Such scenarios included cyber criminals targeting a major port, closing terminals, or interfering with containers or confidential data.

Captain Rahul Khanna, global head of marine risk consulting at AGCS, said: "Cyber risk may be in its infancy in the sector today, but ships and ports could become enticing targets for hackers in future. Companies must simulate potential scenarios and identify appropriate mitigation strategies."

The report said cargo-carrying capacity in container ships increased by approximately 1,200% over the past 50 years and by more than 80% during the past decade alone.

The firm explained bigger ships could lead to bigger losses and warned of risks such as limited operation of large ships in a small number of deep water ports, a worldwide shortage of qualified seamen to operate such ships and difficulty of salvage.

Sven Gerhard, global product leader of hull and marine liabilities at AGCS, said:  "Larger ships can also mean larger losses. The industry should prepare for a loss exceeding $1bn in future featuring a container vessel or even a specialised floating offshore facility."

Khanna said the shipping industry "should think long and hard before making the leap to the next ship size".

Movement of cargo on ships was a concern mentioned in the report following the incident of car transporter Hoegh Osaka, carrying 1,400 cars including more than £1m worth of BMW Minis, which was deliberately grounded in the Solent due to listing in January 2015. The issue first became a focus following the capsizing of the car ferry Herald of Free Enterprise in March 1987.

According to the report, the most common cause for ship losses was foundering (ship sinking), with 65% (49 ships) of losses in 2014, followed by grounding, with 13 ships wrecked or stranded, and fire/explosion, with four ships lost.

This article appeared in our March 2015 issue of The Actuary.
Click here to view this issue
Filed in:
03
Topics:
Risk & ERM