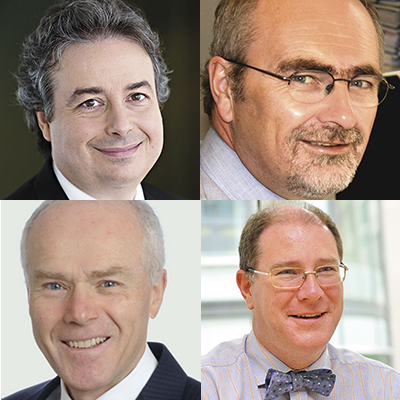 Each year the IFoA invites eminent individuals who are experts in their respective fields to be put forward for election as Honorary Fellows. The IFoA Honorary Fellows election will be opening shortly. Members entitled to vote (Fellows, Associates, and Honorary Fellows) will receive emails from president Nick Salter and Electoral Reform Services containing details.

Council has approved the following individuals to be put forward to a member vote.

Thomas Béhar is currently president of the Institut des Actuaires, group chief actuary and member of the Executive Committee of CNP Assurances, the largest personal insurer in France. He has actively developed standards and guidance within the Institut des Actuaires, and is a strong advocate of the development of professionalism. He lectures in actuarial studies at the Paris Institute of Statistics, ENSAE ParisTech (the Paris Graduate School of Economics, Statistics and Finance) and Université Paris-Dauphine.

Karel Goossens is chief executive of the Institute of Actuaries in Belgium (IA|BE) - a part-time role, having recently retired from Towers Watson. He is the former president of IA|BE and was chair of the Actuarial Association of Europe (AAE, formerly Groupe Consultatif Actuariel Européen) from October 2012 to September 2013. He chaired the Insurance Committee of the AAE from May 2007 to October 2012.

David Pelletier is chair of the Actuarial Standards Committee of the International Actuarial Association (IAA). He is a past president of the Canadian Institute of Actuaries and has completed a term as chair of the Canadian Actuarial Standards Board. He is director of the Global Risk Institute. He retired from RGA Life Reinsurance Company of Canada in 2010, where he was chair, chief executive and executive vice-president.

Andrew D Smith is a partner at Deloitte and currently an active member of the IFoA's model risk and extreme events working parties, and co-chair of the communicating uncertainty with professionalism working party. Over many years, Andrew has served on numerous IFoA working party groups, presented at conferences and events worldwide and produced a number of publications, including a paper entitled The Financial Theory of Defined Benefit Pension Schemes (with Shyam Mehta and Jon Exley in 1997) and the Smith-Wilson yield curve extrapolation formula (2000), now used for the risk-free curve under
Solvency II.

Information on the election and how to nominate future individuals is available from the IFoA website at www.actuaries.org.uk or by email from [email protected]