TW team towers over the world on Kilimanjaro 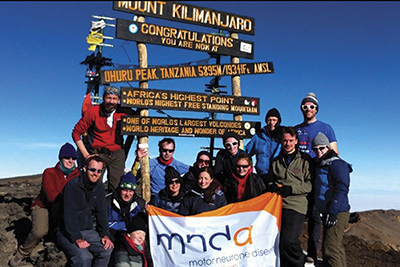 Fifty Towers Watson associates, more than £90,000 raised for charity and the highest freestanding mountain in the world. Here's a taste of what happened when we took on Kilimanjaro in October.

For many of us, training had consisted of chatting about the trip during the lunch hour, while attempting to treble North Face's share price through panic buying - to say we weren't prepared for what lay ahead of us was an understatement. Thankfully, our fundraising efforts had been more successful. Before we set off we'd raised approximately £50,000 for the Motor Neurone Disease Association (MNDA) between us.

Stage one went to plan; we all successfully negotiated our flights and arrived at the hotel in one piece. We then set to work familiarising ourselves with the local town and our fellow compatriots, while taking in the view. From then on it was downhill (or rather very sharply uphill), with members of the group feeling the strain of the intense walking schedule by the end of the second day. The guides and porters did a fantastic job making us as comfortable as possible, but there was no getting away from the plummeting temperature and the onset of altitude sickness for many. By day four we were 3,500m above sea level. This provided us all with a great view, but chronic headaches! Regardless of this, team spirit was strong as we approached our goal.

With summit night upon us, we set off at midnight, head torches at the ready, feeling positive. The final climb was by far the toughest thing many of us had ever done, both mentally and physically. We walked for between seven and nine hours through the night, to arrive at the summit just after sunrise.

An impressive 43 of us made it to the top, beating the 75% average completion rate considerably. More importantly, everyone made it back down the mountain on their own two feet.

A few months on, it has finally sunk in just what we achieved. To top it off, the final count on the fundraising hit almost £91,000, which has been donated to the wonderful team at MNDA, who have given us so much support over the past year too.