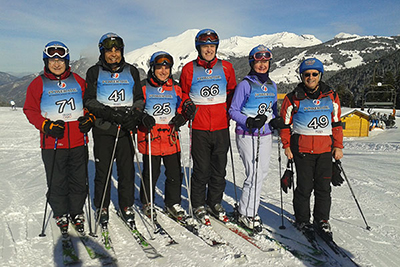 Just before Christmas, the Worshipful Company of Actuaries (WCA) had a very jolly carol service at St Lawrence Jewry Church next to the Guildhall. About 80 actuaries and friends then went on to supper at Armourer's Hall, followed by more singing led by Peter and Sue Thompson and baritone Allan Arthur.

It was a fun evening and a great start to Christmas festivities.

The last big event for the WCA was the livery companies' skiing competition in Morzine, France, on 23-24 January. There are a number of trophies to be won, including the Actuaries Cup in which times are age-adjusted by a simple formula we invented but which is deemed to be fiendishly opaque and suspicious by the other teams participating.

As the actuaries have written the software to determine the results for all of the trophies, we do start each race with a bit of an advantage. We hope, therefore, to regain the trophy for the best court team, which we won last year in a tight finish, aided by a masterly giant slalom exhibition from president of the IFoA, Nick Salter.

While on the sporting theme, congratulations to Gary Anderson, who has been chosen as the actuary to take up the guaranteed place in the 2015 London Marathon granted to us. He will be raising money for the Company of Actuaries Charitable Trust and I hope many of you will support his sterling efforts.

I recently represented the Actuaries Company at the 500th anniversary of the Innholders Company at a magnificent service at Southwark Cathedral followed by a wonderful reception in the adjoining marquee. I have returned the compliment and invited the Master Innholder to our 500th anniversary which will be in the year 2479. Our Clerk, and his successors in that role, are responsible for ensuring that the invitation is honoured. I will be checking from above!