On Thursday 14 August, the Student Society held its annual BBQ in the beer garden of DTwo, on Harcourt Street. 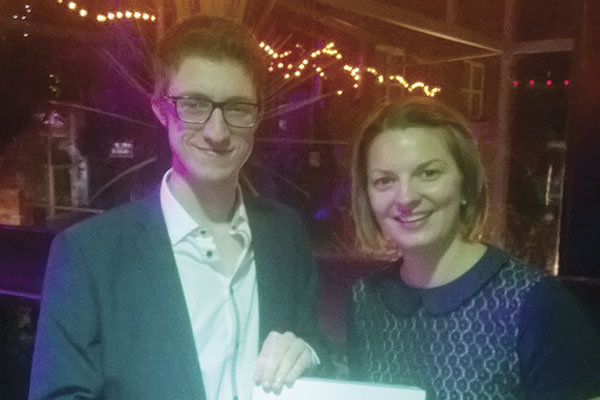 The excellent food on offer on the night included steak burgers, pork sausages and was supplemented by a salad bar, all washed down with a few complimentary drinks.

On arrival each member was given a raffle token, and eight lucky people were chosen at random to battle it out in a question round to decide the lucky winner of the iPad.

The questions provided the finalists with a tough test of their knowledge; sample questions included "How many zeros in a googol?" and the equally challenging "How many goals were scored in the 2014 World Cup?"

At the end David Coulter (left) proved a worthy winner and became the proud recipient of the iPad. Jenny Johnston of Acumen Resources was in attendance to present the prize.

With the formalities completed, it was left to the members to enjoy the rest of the night.

A great night was had by all, and it was fantastic to see the annual event so greatly supported by such a large number of the student body.

The current committee would like to thank all its members for their support over the year. Keep a watch out for upcoming events after the exams from the new committee.