A great pool of talent

The ever-popular SIAS pool tournament was held on Thursday 23 October at Rileys in Victoria, with 44 teams battling it out to win the pot of glory. 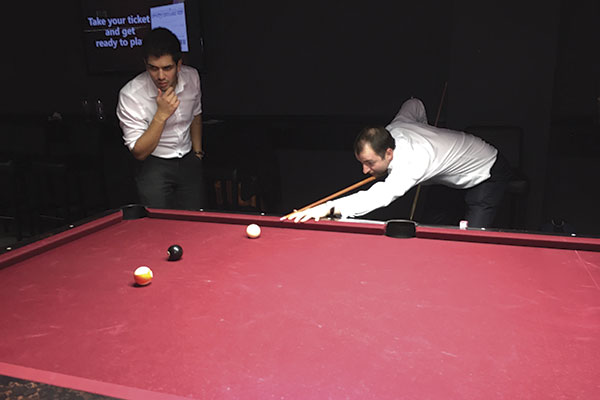 The first round involved a group stage where each team competed to be crowned table-winner and proceed to the next stage. It did not take long before the action heated up with the rule book being brought into question on many occasions.

The night became more intense as the knockout stage followed, with each player in contemplation for several minutes before taking a shot, as one mistake could end the tournament for their team.

For those eliminated at the group stage, this did not mean the end of the night as many made a trip to the bar, enjoyed a variety of burgers, and played friendly games of pool while the tournament progressed.

As the population of best 'pool-playing actuaries' was slowly whittled down, we entered the best-of-three cup final. This was a tense affair where Liam Hollywood and Mark Hoare from Premier were up against Shareen Patel and Ben Sheldon from Catlin. It was a high-quality game, but after about an hour, the boys from Catlin were crowned as this year's worthy winners.

Thanks to all the entrants and spectators for another enjoyable tournament. In particular thank you to Adrienn from Rileys for helping to organise the event. I look forward to seeing all of you at the next SIAS Pool Tournament for a re-match.

This article appeared in our December 2014 issue of The Actuary.
Click here to view this issue
Filed in:
12
Topics:
Pensions