A cavalcade of events

It has been a busy month for the Actuaries Livery Company. I represented the Company at the Garden of Remembrance Service in the Churchyard of St Pauls Cathedral on 3 November  a magnificent occasion  marking the centenary of the start of the Great War. 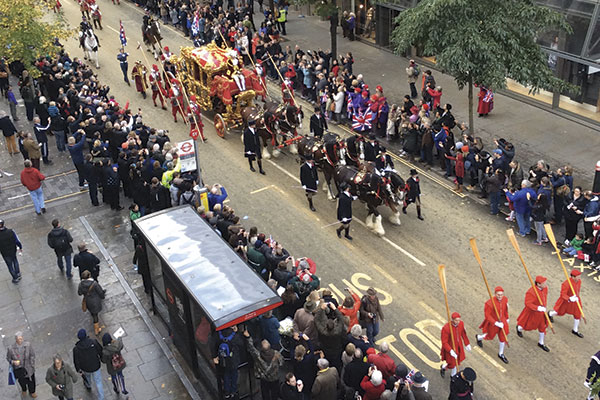 It has been a busy month for the Actuaries Livery Company. I represented the Company at the Garden of Remembrance Service in the Churchyard of St Paul's Cathedral on 3 November - a magnificent occasion - marking the centenary of the start of the Great War.

As well as representatives of the Armed Forces and various military bands, the Masters of 102 livery companies were there, all planting crosses of remembrance. Only 101 of the Masters had remembered to bring a coat or umbrella, but luckily for me the rain held off until just before the end. A few days later, actuaries with family and friends were kindly invited to watch the Lord Mayor's Show from the balcony of Barnett Waddingham's Cheapside office.

Peter Thompson and Michael Tripp joined me to represent the Actuaries Company along with representatives of other livery companies on Float 100 - an interesting number, being the smallest perfect square which can be expressed as the sum of nine consecutive primes.

I suspect we were not the main attraction of the show, even for those on BW's balcony, as we heard several people in the crowd asking, "What's an actuary?".

Then on 12 November Sir David Spiegelhalter accepted our invitation to give the annual Company of Actuaries Lecture. Sir David is the Winton Professor of the Public Understanding of Risk at the University of Cambridge, and many senior members of the City dined with us at Staple Inn to hear him. He first came to the public's attention with the BBC documentary Tails you Win, and he spoke very amusingly on common misconceptions in risk and statistics. If only we had had the lecture in 2007, perhaps the banking crisis might have been averted.

Also in the audience was one of our honorary members, Johnny Ball. Johnny is one of the few other mathematicians to have tasted TV fame. Some of the older readers might remember his Think of a Number series from about 30 years ago.