The government and insurers should collaborate on a plan to reduce flood risk, the official advisory committee on climate change has said after finding that the uptake of sustainable drainage systems (SuDS) in new development was low. 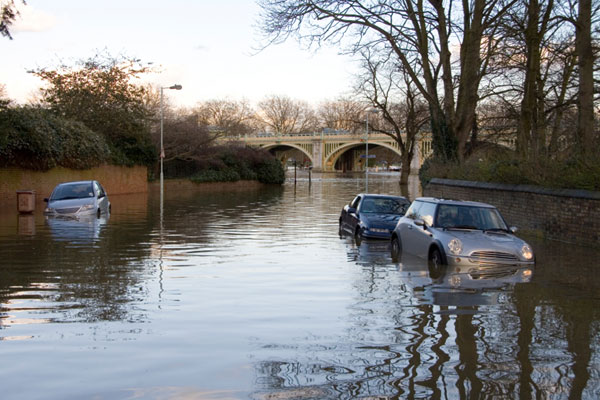 Following a review on flooding and the current capacity available to deal with it, the Committee on Climate Change said it had noticed a 'significant weakening' of plans by the government to manage flood risk from new urban growth.

The Managing climate risks to well-being and the economy report, published yesterday, found that the implementation of the SuDS had been repeatedly delayed due to concerns about the impact on house builders and the pace of new development. It warned that underinvestment in flood prevention increased the potential for avoidable flood damage, especially with climate change.

'Rules brought in following the [government's 2007 independent Pitt Review] to limit the number of additional gardens lost to impermeable surfacing are not being enforced. The automatic right to connect new development to public sewers remains, six years after the Pitt Review recommended this be withdrawn,' the report stated.

'Regulations requiring local authorities to approve and adopt SuDS in new development have been continually delayed. There remains low uptake of permeable paving options within both domestic and commercial projects.'

John Krebs, chair of the Climate Change Committee's Adaptation Sub-Committee, which produced the report, expressed his concern in a letter to Environment Secretary Elizabeth Truss.

'Our concern is that the planning system alone, without resolving the issues Pitt identified, will not deliver the increase in the uptake of sustainable drainage systems desired,' he said.

The committee made a host of recommendations calling for improved flood insurance and property resilience.

It said: 'The government and the insurance industry should agree a strategy for how the “Flood Re” scheme will be used to incentivise and support additional action by high risk households. This would help insurance to remain affordable as the scheme is withdrawn.'

She said the government wouldn't account for homes prone to an increased likelihood of flash flooding.

In September, the British Property Federation accused the government of making 'empty promises' over the Flood Re scheme, saying it was concerned over the lack of flexibility in the regulations.

This article appeared in our October 2014 issue of The Actuary.
Click here to view this issue
Filed in
10
Topics
Environment