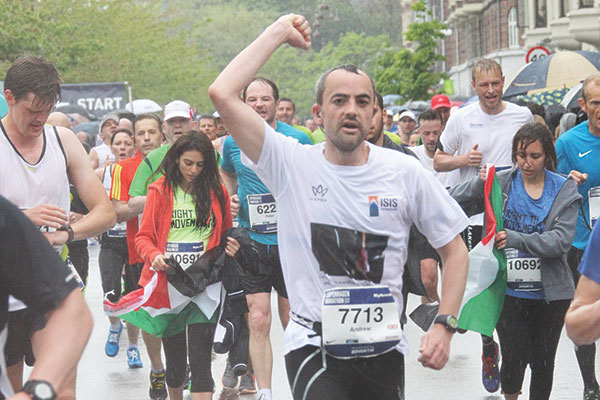 Well done to Andrew O'Brien who has completed his impressive 12-in-12 feat raising over £10,000 for the ISIS Foundation. He finished his final run in the Copenhagen Marathon on 18 May 2014 and this is an extract from the final instalment of his blog.

What a race to end on! Copenhagen is a colourful and relaxed city in one of Scandinavia's most dynamic regions. My day started on Islands Brygge, with runners asked to arrange themselves according to predicted finishing time. Once again I stuck with the four-hour pace group before breaking away towards the end - the norm for my post-stress-fracture marathons.

The crowd support was pretty decent along much of the route as it looped around the city centre a few times and I kept spotting the kilometre markers intended for much later - reminding me of just how far I still had left to go!

Sadly, after a relatively warm start to the race, the heavens opened and the rain poured down shortly after I broke away from the pace group at around the 36km mark. As I was digging deep, a guy running with a pushchair went speeding past me - complete with a sleeping toddler and racing wheels! But the most surreal moment was still to come. As the rain lashed down around me I caught up with a crew of marathoners running with a Viking ship - with a pair of runners at the back and front of the boat with another reclining on it like the Queen of Sheba! Feeling flummoxed and fatigued, I kept going.

I'm not prone to grandiose gestures but as I finally closed in on the finish for the very last time I triumphantly shook my fist in the air as I crossed the line, completing my twelfth marathon in the past 12 months.

Hobbling back to the hotel in the rain after the finish - cold and soaked - was an ordeal in itself and I was even tempted to run had my legs not turned to concrete.

I'm grateful for all the amazing support I've received and it's really helped me to keep going.

If you would like to make a donation, visit www.justgiving.com/ISIS12in12

This article appeared in our July 2014 issue of The Actuary.
Click here to view this issue
Filed in:
07