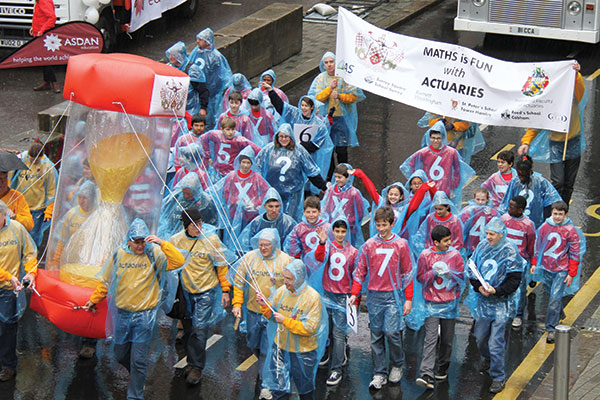 The Lord Mayor's Show, an annual event that has been taking over the streets of London for nearly 800 years, had a particular significance for Actuaries in 2013. Adrian Waddingham CBE was participating as non-aldermanic Sheriff, and the Worshipful Company of Actuaries brought along a float named 'Maths is Fun'.

After a pleasant morning's preparations, the weatherman's forecasted rain started spot on at 10.30am, along with the procession. Beginning with an RAF flypast, the parade featured over 6,000 soggy people, military marching bands, Chinese acrobats, a procession of decorated floats and the Lord Mayor's gilded State Coach. Towards the head of the procession were two wicker giants, Gog and Magog, the traditional guardians of the City of London.

The Actuaries float, number 57 out of 155, comprised a crew of actuaries alongside teachers and pupils from Reed's School, Cobham, and from Surrey Square and St. Peter's schools. (The Company of Actuaries Charitable Trust is supporting Reed's in a Primary Maths Forum whereby they help primary schools, of which these are two, improve maths education.)  Marching with the float was Johnny Ball.

The whole team, 50 in all, shrouded in blue plastic macs, cheerily plodded though the streets following a giant inflated hourglass, symbol of actuarial forethought. Ball led the pupils with shouted questions. Enthusiastically they replied, giving a firm impression that maths, or at least arithmetic, really can be fun.

Following much later in the procession came the many VIPs, including the carriages of the Worshipful Company of Actuaries with Master Charles Cowling accompanied by Wardens and Clerk, of Sheriff Adrian Waddingham, and the 18th-century gold State Coach of Lord Mayor of London, Alderman Fiona Woolf.

This article appeared in our March 2014 issue of The Actuary.
Click here to view this issue
Filed in
03