Another year chalked off 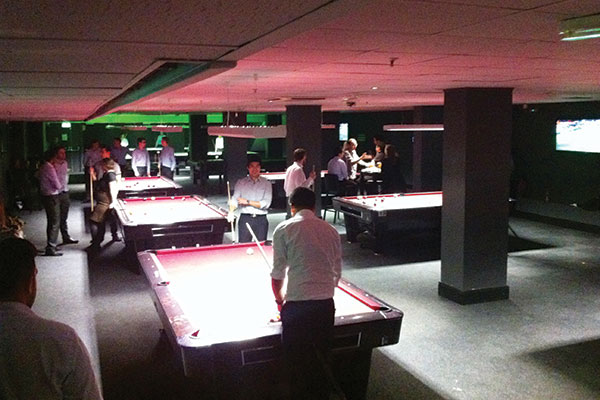 On the evening of 24 October at Riley's pool bar in Victoria, London, close to 100 members of the actuarial community met to inject some light frivolity into what was a damp, dark and thoroughly autumnal evening.

Spirits were high as actuaries do what they do best - coming up with puns and jokes on the evening's activities. The best I heard was: What do you call a woman playing pool with a pint of beer on her head? Answer: Beatrix Potter.

With 47 pairs across 12 tables, the pool bar was packed to the rafters. We started with group stages. The winner from each table went through to the knockout stages along with four of the 'best runners up'. To decide which runners up to put through, some actuarial expert judgment was used which inevitably led to strong challenge from some competitors.

After this, a straight knockout tournament began. Most last 16 matches were hotly contested with competition strengthening further for the quarter finals. These matches were decided over a single frame and so there was plenty of 'pot luck'. For the four teams strong enough or lucky enough to make it to the semi-finals, the remaining games had some risk diversification with each match being decided over three frames.

At around 22:15 the final began between two of the hot favourites - Chris Pritchard (Barnett Waddingham) and Michael O'Akuwanu (Sanlam) faced off against Dom Nunns (Hamish Wilson) and Tom Oxley (non-actuary).

left on the table while Tom had a chance to pot the black.

However, a character-filled response from Chris and Michael led to just one spot being left on the table, but in an attempt to pot the final spot, they were very unfortunate to pot the black instead and so Dom and Tom were declared the SIAS 2013 pool tournament champions.

Congratulations to Dom and Tom and Chris and Michael on their triumph and many thanks to all the participants and Riley's pool bar for making the evening such a success.

If anyone has comments they would like to share to help make next year's tournament even better, then please email Mark Gorman at [email protected].

This article appeared in our March 2014 issue of The Actuary.
Click here to view this issue
Filed in:
03