The Other Half Club - the first quarter century 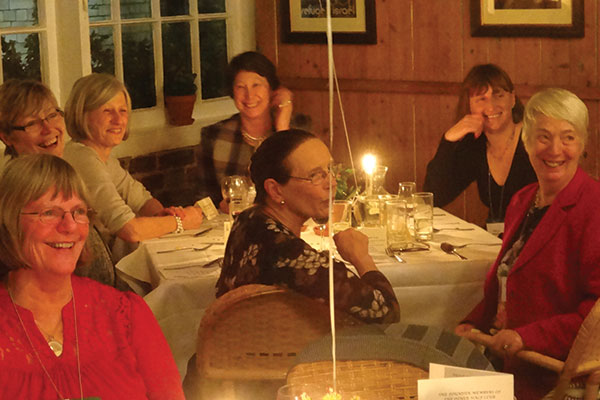 Twenty-five years old! In 1988 a group of 'other halves' at a Fellowship Club cocktail party thought that they would like to organise occasional meetings on the evenings that their husbands or partners were at Club or Institute meetings and dinners and so the Other Half Club was born.

During those 25 years members have made good friends, enjoyed great dinners, outings and events, and met up at many Actuarial Congresses.

The first event was at Amandini's restaurant in Sicilian Avenue. Following that the club has dined regularly at Le Café du Marche in the City - close to Barbican tube station - where they continue to have a private room and the full attention of staff who view us as favoured and long-standing customers. Of those 'founding' members some half a dozen still attend dinners and functions regularly and many attended an anniversary dinner in November.

The programme for 2014 includes visiting the Ice Sculpting Festival in London, two dinners including a visit to the Old Bailey, three lunches including a matinee to see War Horse, a guided walked around Smithfield Market and the surrounding area and a visit to the Guildhall School of Music & Drama to see a production.

Over the years there have been a series of volunteers to undertake the roles of chairman and secretary, currently Jacky Pendleton and Lesley Birse respectively. New members to the club are very welcome - the only entry criterion is that you are the 'other half' of an actuary, either still working or retired.

For further information on the club or to join:

This article appeared in our February 2014 issue of The Actuary.
Click here to view this issue
Filed in
02