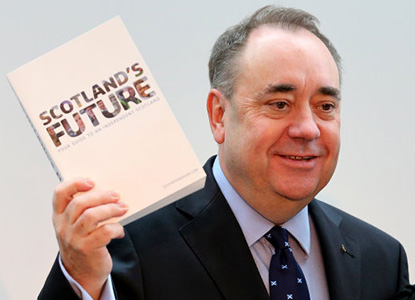 Last month, the Institute and Faculty of Actuaries identified a number of challenges Scotland and the rest of the UK would face should independence go ahead.

Commenting on the 670-page document, Scotland's future - your guide to an independence, published yesterday, Martin Potter, leader of the IFoA's Scottish board, said not all of the institute's concerns had been fully address.

'Whilst [the white] paper offers further clarity on the Scottish Government's proposals for an independent nation state, questions remain around how this will be achieved,' said Potter.

'In particular, we would welcome further detail on the proposed regulatory framework for financial services.'

The white paper sets out the Scottish Government's intentions regarding membership of the European Union and its plans to retain Sterling as part of a currency union with the rest of the UK. There are also plans to create Scotland-specific regulatory bodies in some areas, but in others a pan-UK regulatory framework is proposed.

Potter observed: 'Understanding the benefits and drawbacks of a patchwork regulatory system is vitally important for the financial services sector and consumers. The IFoA will seek further detail from all bodies to better understand the risks and benefits such changes would present.'

Some of the IFoA's concerns were echoed by Hargreaves Lansdown, which warned that both savers and investors could face the risk of 'duplicated institutions, duplicated systems and more complexity'.

Tom McPhail, head of pensions research at the firm, said: 'As well as the obvious costs of all these duplicate institutions, there is the un-quantified and potentially far greater cost of having to do everything twice.

'Every bank, insurance company, financial adviser and investment manager North and South of the border will have to invest huge sums of money in running duplicate systems and training their employees to deal with two different regimes; to take just one simple example, if a customer wants to know what rate of pension tax relief they are entitled to, the answer will depend on whether they live in Carlisle or up the road in Dumfries,' he said.

'This all has a cost to investors North and South of the border; in simple terms a Yes vote [at next year's referendum] would mean poorer returns in the future on ISAs and pensions due to higher administration costs.'

Speaking yesterday, Scotland's First Minister Alex Salmond called the white paper the most comprehensive 'blueprint' for an independent country ever published. It included a list of policy pledges the ruling Scottish National Party would bring in if it were to form the first government of an independent Scotland.

These included a commitment to increase the state pension to £160 per week in 2016/17, the first year of independence.

'Pensioners' incomes will be protected with the triple lock system so that pensions would increase by either inflation, earnings or 2.5%, whichever is highest.'

The paper also said that an SNP government would continue the rollout of auto-enrolment to help address the decline in private pension saving.

The National Association of Pensions Funds warned recently that there would be huge implications for defined benefit pensions and some schemes could close if Scotland were to become independent.

This article appeared in our November 2013 issue of The Actuary.
Click here to view this issue
Filed in:
11
Topics:
Regulation Standards