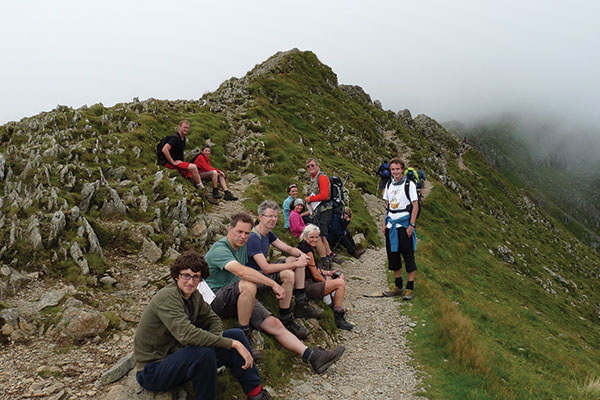 Charles Cowling, master of the Worshipful Company of Actuaries, and a group of friends and fellow actuaries successfully completed a charity walk from Robin Hood's Bay in North Yorkshire to St Bees on the Cumbrian Coast. They finished the coast-to-coast walk made famous by Alfred Wainwright - albeit in the opposite direction to the traditional west-to east route. All in all, 15 walkers, varying in age from 11 to 69, completed the full two weeks with another 62 actuaries and friends joining the walk for one or more stages, all raising money for a number of very deserving charities.

In particular, nearly 40 colleagues from JLT joined Charles for two challenging stages - and some excellent team-building - in Yorkshire and Cumbria.

In between dramatic cliff walks at both Robin Hood's Bay and St Bees, the intrepid actuaries enjoyed the delights of the Little Beck Wood Nature Reserve, the wild remoteness of the North York Moors, the demanding Cleveland Hills, the lovely Swaledale valley, the boggy Nine Standards Rigg over the Pennines and the spectacular views offered by a number of Lakeland peaks. Kidsty Pike, Helvellyn (with the precipitous Striding Edge) and Haystacks, as well as the beauty of Haweswater,

Ullswater and Ennerdale Water and the 'secret valley' of Nannycatch were also on route. Other delights included the steam trains on the North Yorkshire Moors Railway and Settle-Carlisle Line, a chocolate factory, a slate mine, beautiful churches and castles, as well as numerous excellent pubs and hostelries, where many fine pints of ale were consumed.

No actuaries were injured or lost (permanently) during the walk, although some were attacked by an aggressive herd of cows and bullocks at one point, and several managed to go astray at various times during the two weeks - the benefits of GPS technology were particularly welcome on one summit as the clouds descended and all visibility was lost.

In general, the weather was excellent and the walkers had just one day affected by rain - and a couple of hours of drizzle.

After two weeks walking nearly 200 miles, climbing the equivalent height of Everest in the process, the party arrived at its final destination. With a mixture of emotions, pebbles that had been carried faithfully across England from Robin Hood's Bay were tossed into the sea at St Bees and the party adjourned for champagne celebrations. A great adventure had been completed, friendships made and cemented and, best of all, £45,000 raised for some excellent causes.