Firefighters have voted to strike over the governments proposed pension reforms, which would increase the normal pension age from 55 to 60. 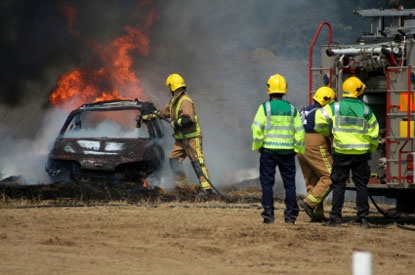 In a ballot called by the FBU, 78% of those polled were in favour of strike action.

The vote was called after what the union said was nearly two years of negotiations with government.

Among the reforms, which form part of the government's wider changes to a host of public sector pensions, it has been proposed that firefighters normal pension age would rise from 55 to 60.

However the union said that over half of current firefighters between the ages of 50 and 54 are not able to meet the minimum physical standard. Beyond the age of 55, two-thirds fail to do so.

Although the government proposed that older firefighters could be moved to less physically demanding roles, FBU general secretary Matt Wrack said only a handful of such posts exist, meaning job losses could follow.

'We cannot expect large numbers of firefighters in their late-50s to fight fires and rescue families without creating danger to the public and firefighters,' he said.

'This result is a clear indication of the anger felt by firefighters. It's still not too late for common sense to prevail if the government is willing to return to the negotiating table. None of us want a strike, but we cannot compromise on public and firefighter safety.'

Responding to the vote, fire minister Brandon Lewis said an independent review, commissioned with the agreement of the FBU, found no reason why every firefighter who remains physically active could not work until sixty.

One in three members of the firefighters' pension scheme already has a retirement age of sixty following the introduction of new terms in 2006, and no-one would be forced to work longer, he added.

'This government does not believe that industrial action is necessary. The pension on offer to firefighters is one of the most generous in the public sector.

'The FBU is creating a smokescreen around the issues of fitness and retirement age to justify their behaviour whilst ignoring the facts.'