KPMG on the ball in fiery five-a-side football final

The 2013 annual North West Actuarial Society (NWAS) five-a-side tournament proved to be an eventful evening, full of brilliant football and heated exchanges. The event featured eight teams, representing all the big names from the region, and was held at Powerleagues state-of-the-art five-a-side complex in Manchester city centre

The teams were divided into two groups, with the top two of each group progressing to the semifinal. Group A saw Towers Watson on top, with some superlative displays of quality football to humble 2012 champion PwC. The battle for the remaining qualification place was fought out by Mercer, PwC and Co-op. After a sluggish start, Mercer battled hard. However, in a key match against Co-op, a dubious goal awarded to Co-op baffled the Mercer team, who argued that it did not cross the line. The referee stood firm and Mercer was knocked out in a 1-0 loss. The remaining qualification place was decided in a head-to-head between PwC and Co-op, with PwC requiring a win and Co-op just a draw. PwC held onto a 1-0 win, thanks to a brilliant save by goalkeeper Paul Brunger.

2012 runner-up Health Shield was the run-away winner of Group B. Royal London started the tournament slowly, but turned its fortunes around and found itself in a deciding fixture for second position with KPMG. The heated match resulted in a 3-0 win for KPMG, meaning the NWAS stalwart was through to the semifinal for the third year running.

And so to the knock-out stages of the tournament. The semifinal line-up saw a rematch of the 2012 final, with PwC pitted against Health Shield. The match quickly turned into a rout for Health Shield, registering a record 8-2 win. The second semifinal was similarly one-sided, with KPMG beating Towers Watson 4-0.

The final line-up saw KPMG v Health Shield. Health Shield was a heavy favourite. However, the 2012 runner-up began hesitantly and invited pressure. KPMG talisman Kevin Nicholson put in a superb Berbatov-esque performance, retaining possession with quick footwork and without breaking beyond a swift walk throughout. In the end, his single goal proved to be the difference between the two teams, as Health Shield lacked the creative spark that had seen the team dominate the majority of games throughout the tournament. Congratulations to KPMG. 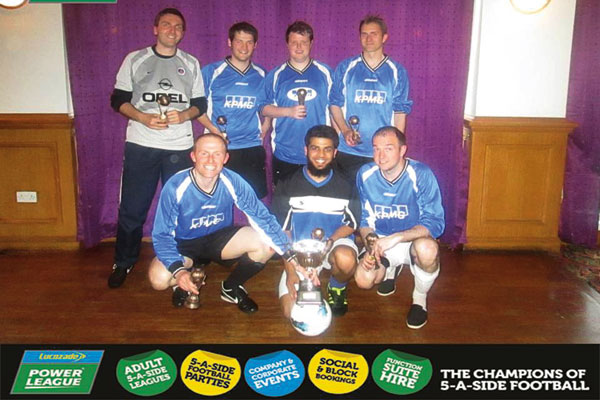 This article appeared in our August 2013 issue of The Actuary.
Click here to view this issue
Filed in
08