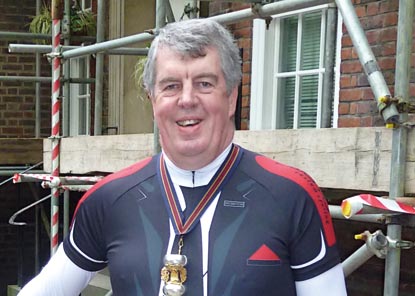 Team gears up for charitable success

The sun shone brightly on a group of nearly 50 cyclists of all ages who braved a 27-mile ride around London, raising over £20,000 for the Company of Actuaries Charitable Trust.

At 8am on Sunday 2 June, the gates of Staple Inn were opened especially for us by the Profession's staff. By 9am some 60 or so people had gathered to see the riders set off in four groups of around a dozen, led by an experienced guide from the London Bike Touring Company. The first group got away at 9.15am, including the Bridgeland family, with Colin, aged 8, riding on a tandem, as well as Bill Rayner and his 14-year-old daughter and Sanjay Gupta and his 15-year-old son. Three other groups set off at intervals after that.

The route took in some lesser-known parts of London as well as the highlights of Greenwich Park, the O2, the Woolwich ferry, the Excel centre, the Olympic Stadium and a very crowded Columbia Road flower market. The guides had designed the route to be mainly along special bike routes, paths, tow paths by canals and even parts of the Greenway footpath, which, we were told, runs over one of east London's main sewers! The sun shone and each group went at its own speed to make the most of the sights and maximise enjoyment. Overall, the fastest group took just over four hours, and the slower, closer to five hours - a good bike ride by anyone's standards.

The Master of the Worshipful Company of Actuaries, Bill Smith (pictured), stood out from the crowd, resplendent in his professional lycra and riding a Brompton. Suffice to say, even on a fold-away bike, his was the group that managed the fastest time - it wasn't a race, of course, but actuaries often like to compete!

At the end of the ride, sore legs and other parts of the anatomy gave way to a sense of achievement and satisfaction. Sally Bridgeland was presented with a Chris Hoy signed montage for raising the most money (approximately £7,000) and members of the Master's team received champagne for the encouragement they gave him! A great day and one that we might well repeat.

So what's next for the Livery? Well, as if 27 miles on a bike wasn't enough, it's 180 miles on foot across the North York Moors, the Pennines and the Lake District on Wainwright's coast to coast route. Watch this space.


Super sleuths leave day job behind for night of mystery

As the sun set on 23rd May, some 30 SIAS members and friends were transported back to New Year's Eve, 1899, when George Sweet, the fifth Earl of Coddingham, was holding his 'Last Gasp' party and so the intrigue and mystery began

Everyone transformed into a character for the night and each was given an envelope setting out more information about their character and objectives. It was then every man and woman for themselves! Some people 'paid' for information, while others tried to get as much money as possible for their knowledge. There were also some surprises throughout the night, including a proposal (unfortunately, an act) and a very dramatic death scene.

Congratulations go to Abigail Clifton of AXA and Alex McDonald-Taylor and Nicky Adams of Barnett Waddingham, who won prizes. Abigail, who played the Earl's trusted butler Jarvis, managed to accrue the most 'money'. Alex's team came up with the most convincing (and correct) theory of who the murderer was. Nicky won the prize for playing his character, Captain Philip Ratliffe, in the most entertaining way.

Many thanks to the fantastic actors from Murder Mystery Games and to Vodka Revolution for the great food and venue.

The head of actuarial science at the University of Cape Town, Shivani Ramjee, has won an award noting the role of UCT in transforming the actuarial profession.

The citation for the Association of South African Black Actuarial Professionals (Asaba) university award stated: "UCT is the institution that has most supported the work of our mentors. Shivani Ramjee has been extremely helpful in allowing access to students and encouraging them to participate in our activities. We have also enjoyed a good working relationship with Billy Enderstein, the South African Actuarial Development Programme (Saadp) representative on campus. This has allowed students to benefit from the synergistic relationship between the two organisations. The school's diverse student body also provides a good base for Asaba mentorship, allowing mentorship student numbers to grow by 80% between December 2012 and March 2013."

Ramjee was pleased with the progress but said much still needed to be done. "We have an important role to play in the pipeline of potential actuaries," she added. "We see this award as a call to further action."

Just a year after our project started in summer 2012, we now have an actuarial examination centre in Kigali, Rwanda.

As part of my job as government actuary to Rwanda, I introduced a careful selection process to recruit mathematician and statistician officers for the Rwanda Social Security Board, who would then study for the first actuarial exam - CT1 - financial mathematics. Following success in the exams, we would then have part-qualified actuaries in Rwanda for the first time!

Applicants needed a mathematics-related degree of a good grade. They then sat an A-level mathematics type exam.

We also tested their level of English at the same time.

We invited all applicants to sit the exam (there were around 150 applications) and 86 applicants came on the day. After marking the exams, we interviewed the higher achievers and, following this process, we recruited our mathematicians/statisticians.

We set up an exam centre at the British Council Offices in Kigali for the April 2013 sitting, when five candidates took CT1.

I am both nervous and excited for the candidates. It is obviously much more difficult studying abroad for these exams and takes that extra special effort so I'll be keeping my fingers crossed for them and wish them every success in their future careers.

Congratulations to Gareth Jenkins (Zurich) and his wife Helen (St. James's Place) on the birth of their daughter on 13 April. Catherine Bethan is a sister to David.

Rusi Kaikhushroo Daruwalla died, aged 91. He became a Fellow of the Institute in 1958.

Alan Farncombe died, aged 99. He became a Fellow of the Institute in 1941.

Professor Stanley Locksley Smaller died, aged 81. He became a Fellow of the Institute in 1962.

Dr Raouf Halim Makar died, aged 92. He became a Fellow of the Institute in 1953.

Tony Peter Williamson died, aged 59. He became a Fellow of the Institute in 1990.

This article appeared in our July 2013 issue of The Actuary.
Click here to view this issue
Filed in:
07