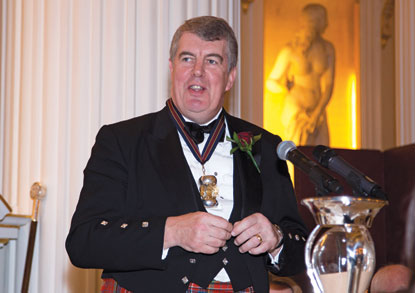 Here's to a good night all round

At one of my previous workplaces, the password to access the actuarial intranet was 'fun'. Whether the IT department meant this seriously, I shall never know. What I do know is that when actuaries and their guests gather for excellent food and fine wine in majestic surroundings, then a great time is had by all.

Tuesday 23 April saw the annual banquet of the Worshipful Company of Actuaries at London's Mansion House. On arrival, we were escorted up the grand staircase by members of the Edmonton Sea Cadets, whom the company supports, for a drinks reception, before taking our places at dinner. Those who have attended a recent livery dinner will have seen the company hourglass, which is overturned at the start of the proceedings and runs for the duration of a perfectly timed dinner. This occasion was no exception and, once the timer was set, the evening began, with Master Bill Smith (pictured) proposing the health of the Lord Mayor.

We were entertained while we ate by spectacular pipe playing, the musicians calling and answering across the hall from either end of the gallery, high above us, and afterwards by thoughtful, erudite and very amusing speeches. All too soon, the sands of time had run out, and, filled with happy memories of the evening, we made our way home. Why not join us next year?

On 4 March the 20th Inter Livery Swimathon took place at its usual venue of the RAC Club, Woodcote Park, Epsom.

Once again, the Worshipful Company of Actuaries participated, represented by a team of enthusiastic swimmers. The usual format is for five swimmers to each swim 1km and complete the 5km (170 lengths) swim in under two and a half hours. However, this year the WCA team comprised four swimmers: David Hager, Bill Harris, Jay Stewart and Petrea Simmons.

The charities supported were the Lord Mayor's Appeal (this year, the Appeal was raising money for the City Music Foundation, Futures for Kids, The Gifford Wood Appeal, funding the planting of trees in Epping Forest and the conservation of The Harold Samuel Collection of 17th-century Dutch and Flemish paintings) and the Worshipful Company's own charity, the Company of Actuaries Charitable Trust, which supports a number of causes. More than £1,000 was raised in sponsorship.

After their sterling efforts, Jay, David and Petrea together with other swimmers, enjoyed a well-earned dinner in the Club. They were joined by David's wife, Jeanette, who not only lent support but was also able to take the team photo.

Punter Southall actuary Emily Wicks is a new record holder after she and her husband clocked the fastest-ever London marathon time for a married couple. Their combined time in the London Marathon added up to four hours, 58 minutes, 22 seconds. Emily was the fourth British woman to finish that day, coming in at 164th overall with a time of 2:39:15. Husband Phil was the second British man over the line, at 15th overall and a time of 2:19:07. The previous fastest time for the event was 5:42:11, which was set by David and Claire Grima in 2011.


Rise to the challenge of abuse claim modelling

The first London Market Student Group event of 2013 was a talk by Paul Murray about 'abuse claims'. Paul has worked as an actuary in the London Market for 22 years and is a director in the risk consulting and software practice at Towers Watson. Recently, he has been involved in commutation agreements between insurers and reinsurers relating to claims arising from abuse suffered.

The subject has seen much publicity of late, including the Jimmy Savile (Operation Yewtree) and Magdalene Laundries cases.

Studies indicate that around 10-15% of children are abused, and around 15% of these cases are potentially 'insured' abuse. However, not all of these will result in a claim, as some victims will want to put the abuse behind them and move on. In addition, proving liability can be difficult given delays between the event and claim. However, for successful claims, the losses for insurers can be significant, with the largest UK award to date being £621,444.

After setting the scene, Paul focused on challenges actuaries meet when modelling abuse claims. Questions such as 'What is the exposure?', 'Have there been any claims so far?' and 'How large can we expect claims to be?' are all difficult to answer.

When it comes to modelling, a stochastic model is the only option, given the low frequency/high severity nature of the claims. But this produces other challenges. Issues such as lack of aggregation of claims for reinsurance or spreading of claims over a number of years are also significant.


Off to explore 'wider fields'

I have enjoyed 30 years working in investment, most recently as head of insurance advisory at F&C, and previously at Abbey Life Investment Services. I have applied my actuarial knowledge to devising investment solutions to reduce risk and to meet a wide variety of objectives.

While enjoying that role, I have also been an active member of the Methodist Church and I've been a local preacher (preaching and leading worship) for 10 years.

Much to my surprise, I suddenly felt called to train for full-time work in the church. As a result, I have spent the past three years doing part-time study alongside my professional work. My training is just coming to an end, so I am quitting the City and taking up my first appointment as a Methodist minister in Hertfordshire in September. I will have pastoral charge of Abbots Langley, Kings Langley and Croxley Green Methodist churches.

The training has thrown up some interesting challenges. Intellectually, it has been strange to study again and to address some tough theological and ethical issues. However, I've also been surprised how privileged I've felt to be alongside people as they face uncomfortable pastoral issues.

Congratulations to Tim Birse and Patrina Effer, who have both been awarded the Silver Acorn from the Scouts Association for the work they have done. The Silver Acorn award was first introduced in 1933 as a St George's Day award and is given 'in recognition of specially distinguished service'. Tim and Patrina are two of the many people involved in Scouting and Guiding.

To find out more, please visit

Adrian Dobson (JLT) and wife Emma are pleased to announce the birth of their son, Benjamin Thomas, on 30 March at 2.30pm, weighing 8lb. Within four weeks, Benjamin has made it up to 10lb 9oz by guzzling vast amounts of milk! The couple's first child, Alice, is very pleased with her new little brother.

This article appeared in our June 2013 issue of The Actuary.
Click here to view this issue
Filed in
06