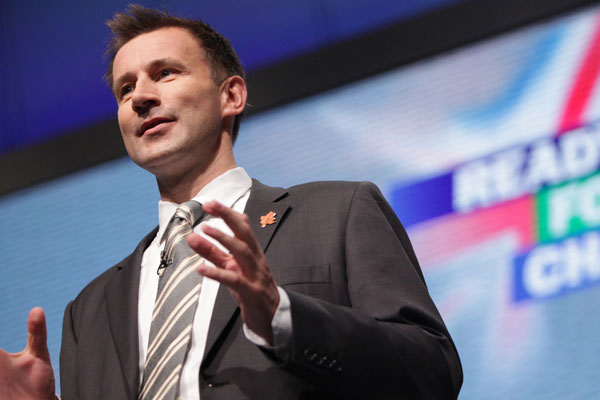 Figures published by Public Health England revealed that people in the North of England have a higher risk of early death than those in the South, but that premature death rates do not necessarily tally with a region's socio-economic situation.

The data, which the agency has published on its Longer lives website, breaks down early death rates by council area across the four major courses of premature death - cancer, heart disease and stroke, lung disease and liver disease.

It used a 'traffic light' rating system so the areas with the highest number of avoidable deaths are rated red, those near average receive a yellow status and those with low numbers are rated green.

On this basis, 42 council areas in the North of England are rated red, compared to just 31 in the Midlands and South, including ten in London.

Commenting on the figures, Hunt said: 'This shocking variation in early and unnecessary deaths means people's lives are needlessly cut short, and that cannot continue unchecked.

'I want areas to use the data released today to identify local public health challenges like smoking, drinking and obesity and to take action to help achieve our ambition for saving 30,000 lives a year by 2020.

'Being more transparent will also allow professionals and the public to see how their local area is performing over time, allowing them to intervene and make improvements happen.'

Local authorities became responsible for public health spending their area under NHS reforms introduced in April. They are expected to with Clinical Commissioning Groups through local Health and Wellbeing Boards to develop plans to improve the health of their local communities.

They will be expected to use the data published today to gain insight into the situations they have gained responsibility for and to identify areas of concern and take action to address them.

According to the Department of Health, efforts to improve public health such as smoking cessation and improved diet could dramatically reduce the 103,000 avoidable premature deaths recorded in England each year.

Experts believe a person's likelihood of dying prematurely from one of the top four killers varies widely between local authorities due to differences in risk factors, such as obesity, alcohol and smoking, and socioeconomic determinants.

This article appeared in our June 2013 issue of The Actuary.
Click here to view this issue
Filed in
06
Topics
Health care