Legislation on third way pension schemes based on defined ambition risk-sharing could be introduced before the end of the current Parliament, the pensions minister has suggested. 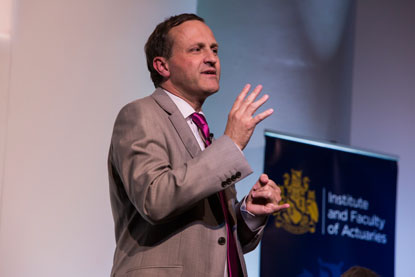 Closing the Institute and Faculty of Actuaries' Pensions Conference 2013, Steve Webb said that legislation was possible by 2015, although his choice of words suggested it would be for the next government to address.

'There is one further session before the election. Decisions have yet to be made about that Queen's Speech because we have only just had this Queen's Speech, so I wouldn't assume that it's not possible to get things done in this Parliament.'

Webb said that employers were willing to provide something more than a 'minimalist' defined contribution scheme. Defined ambition schemes will offer more guarantees than DC, but with less risk to employers than defined benefit pensions.

'The early signs in talking to employers is that there is an appetite for going beyond the bare minimum core of minimalist DC,' he said.

Webb had published a paper before Christmas - Reinvigorating workplace pensions -  that outlined some of the options. He told delegates that this would be 'refined' in the next few months. Then, he added, 'we've got to get on with it'.

With employers rethinking their pensions provision following auto-enrolment and the end of contracting out in 2016, there was a need to move quickly.

'If we are not in a new place where firms can choose some of these new models with a degree of confidence then this is maybe a window that doesn't come round again.'