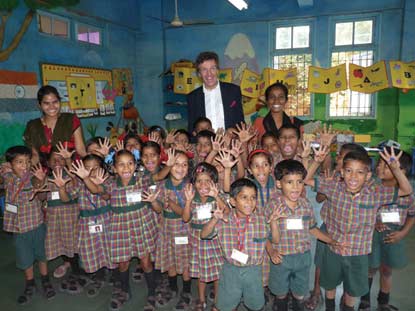 Later this year, Master-elect of the Worshipful Company of Actuaries, Charles Cowling, will lead some 30 actuaries and friends on one of the UK's most challenging long-distance walks to raise money for charity. Walking from Robin Hood's Bay in North Yorkshire to St Bees on the Cumbrian coast, the group will cover approximately 200 miles in two weeks and climb the equivalent height of Mount Everest.

They are looking to raise money for the Company of Actuaries Charitable Trust (CACT) in its support of mathematics education, and also the work of the Udaan School in Mumbai and the children's charity Kidz2gether, which specialises in support for children with autism and autistic spectrum disorders.

Charles is pictured with some of the children from the Udaan School, most of whom come from families who have never received any formal education. The Udaan School provides these children an education that is unavailable elsewhere. Without this, the children would end up on the streets, in very low-paid hard manual work or married by the age of 13 or 14.

Charles says: "The school and the people at Udaan are an inspiration. In the face of huge challenges and some real hardship, the teachers and pupils alike are bright, charming and delightful. This is a chance to make a huge difference to peoples' lives."

Also pictured are teachers Malkawa Bomidi and Divya Dubey, both of whom, as previous students at the Udaan School, exemplify what the school is able to achieve in giving these children a chance to realise their dreams and aspire to jobs and career opportunities, such as teaching, that would otherwise not be possible.

The team has set the very ambitious target of raising £30,000 for these hugely important causes and your support would be very much appreciated.  Best of all, JLT has agreed to match all donations pound for pound, up to the first £5,000, ensuring that your charity goes even further.

For more information or to donate, go to uk.virginmoneygiving.com/team/wca

The SIAS 2012 Dance Night was held in London on 21 February at Revolution, America Square. It was the perfect setting for the evening's events, with exposed brickwork, wooden floors and Clint Eastwood classic The Good, the Bad and the Ugly showing on the flat screens to get everyone in a cowboy mood. Not that they needed much encouragement - everyone certainly looked the part.

Following the welcome drinks, the band played an extended introduction to break the ice with some easy dance moves such as 'Swing your partner' and 'Promenade'. Surprisingly energetic, it had everyone topping up their cocktails to quench their thirst! Following an intense hour and a quarter of dancing to increasingly complex routines, the arrival of food provided a welcome break so everyone could catch their breath.

Throughout the night, the band commented on how surprisingly good the group was. With that in mind, they launched into a particularly complicated routine called the 'Cumberland Square Eight', where the room split into groups of eight, each subdivided into two pairs of four. There were several moves in this routine, the first being a 'Right/left arm star' and the finale being the 'Basket', which sounds easier than it was! This comprised two couples, with the guys facing one another, placing their hands around the girls' waists and the girls placing their hands over the guys' shoulders, spinning fast enough so the girls' feet left the ground. Not one for the faint hearted!

But it didn't end there - later routines included my personal favourite, 'Dipping and diving'. And everyone got into the spirit of the night so well that I'm sure I even heard a Yee-haw or two!

Thanks to the brilliant Nellie Belles band, Revolution, and all those who came along. We hope to see you at the next SIAS dance night on a dance floor near you!

Despite bitterly cold temperatures, the sun emerged briefly on 28 February for the unveiling of the Staple Inn sundial, commissioned and presented by the Staple Inn Actuarial Society (SIAS) to Philip Scott, president of the Institute and Faculty of Actuaries, to celebrate the SIAS centenary.

On presenting the sundial, SIAS chairman Martin Pike commented: "It also recognises time as something that's important to actuaries. We help our clients deal with liabilities that become payable many years in the future."

For the full report, visit www.theactuary.com

Alix Frost is running the Virgin London Marathon on 21 April 2013 to raise funds for the Primrose Hospice Centre of Care.

The hospice provides care to adults living with life-threatening illnesses in Redditch, Bromsgrove and was a huge support to Alix. They offered her a lifeline during her recent treatment for invasive cancer, when she was at her lowest point, enabling her to complete the treatment and give herself the best chance of survival.

Alix is fortunately now in a position to be able to give back to the hospice. She has returned to work and to recreational running. Despite having never run even a half marathon, Alix is training hard and is determined to do her best. We wish her the very best of luck.

If you would like to sponsor Alix, please visit www.justgiving.com/alixfrost

Find out more about Primrose Hospice at www.primrosehospice.org/home

The fourth annual Livery Company Skiing Competition took place in Morzine in France in January. With over 100 skiers from 17 livery companies, this was one of the largest competitions to date. The Actuaries put forward a team of five, consisting of Jerry Staffurth, Tony Leandro, George Yoxall, Richard Hawkes and Fiona Morrison. Unfortunately, they missed out on the Actuaries Cup, which was won by the Leathersellers.

The next competition will be held in Morzine on 24 and 25 January 2014. All levels of skiing ability are welcome.


Keep up your good works

The Actuary, in conjunction with the Worshipful Company of Actuaries, has been running a campaign to target £1m through the fundraising activities of actuaries and we would be delighted to hear about your charitable work or activities.

John Edward AGER died recently, aged 81. He became a Fellow of the Institute in 1958.

Norman Joseph Deryck AMES died recently, aged 68. He became an Associate of the Institute in 1979.

David WILSON died on 2 March 2013, aged 67. He became a Fellow of the Institute in 1968 before transferring to Affiliate membership in 2011.

This article appeared in our April 2013 issue of The Actuary.
Click here to view this issue
Filed in:
04