The number of ships lost at sea increased last year, with human error the root cause of most incidents, Allianz said today. 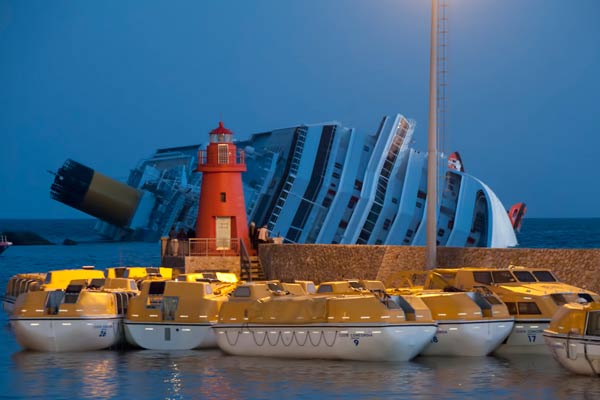 In total, 106 ships weighing over 100 gross tonnes were lost in the 12 months to the end of November, compared to 91 the previous year.

The largest loss of the year at 114,137 gross tonnes was the Costa Concordia which was lost in an accident off the coast of Italy in January. This was followed by the Rabaul Queen ferry accident off Papua New Guinea in February. Both resulted in multiple fatalities.

The most common cause of losses was foundering - sinking or submerging - which accounted for 49% of losses over the 12-month period, followed by wrecking or running aground, which was to blame for 22% of the total.

Allianz noted that collisions such as that between the Baltic Ace and Corvus J last month accounted for just 6% of losses.

Human error remains the root cause of most incidents, with fatigue, economic pressures and inadequate training identified as particular causes for concern by the report.

Dr Sven Gerhard of Allianz Global Corporate & Speciality said: 'For some commercial ship-owners, especially in the hard-pressed bulk cargo and tanker sectors, there is little money for maintenance and little money for training.'

The insurer expects the 2006 Maritime Labour Convention, which comes into force later this year, to help improve safety by addressing the welfare and working conditions of seafarers.

It also noted that in the wake of the Costa Concordia disaster, major shipping companies have initiated self-regulation initiatives. These include the Cruise Lines International Association and European Cruise Council together leading the industry-wide voluntary adoption of policies that go beyond regulatory requirements. Self-regulation of the industry is 'the core driver of safety', Gerhard said.

Allianz also expects technological developments such as last July's introduction of mandatory Electronic Chart Display and Information Systems to reduce accidents, but only where they are properly applied with effective training and management oversight.

Gerhard added: 'Technology is only as useful as the training behind it - and we don't always see this human element keeping up with other advances. What we do see with the best ship-owners is a proactive safety management culture, going beyond the minimum standards and running from top to bottom of the organization. This can really make an impact in improving safety.'

This article appeared in our January 2013 issue of The Actuary.
Click here to view this issue
Filed in:
01
Topics:
General Insurance