The High Court have ruled today that a fracking operation in North Yorkshire can proceed despite thousands of objections, the first to be given the green light since a ban was lifted in 2012. Owned by Barclays, Third Energy was granted planning permission by the county council to extract shale gas at Kirby Misperton in Ryedale earlier this year, even though there were 4,300 letters rejecting the plans and just 36 in support.

Friends of the Earth (FoE) and local residents claimed that the council had not considered the impact on climate change or put money aside for any potential remedial work, claims which have been rejected.

FoE campaigner, Donna Hume, said: "The high court has ruled that fracking can go ahead in beautiful Yorkshire, and we must rise to this latest challenge.

"The judge found that North Yorkshire Councillors had assessed the impacts of climate change.

"But we know that climate change was barely mentioned at that crucial council meeting, and more damningly, that councillors didn't have the information about the total carbon emissions produced from the fracking project."

The council said that they had not sought to bring fracking to North Yorkshire, but once receiving the application had a 'responsibility to determine it and to apply national and local policies'.

However residents have said they will continue to fight the ruling, with claimant, Reverend Jackie Cray, insisting: "We are not prepared for Ryedale to become a sacrifice zone for the sake of industry greed."

The High Court decision comes as the Met Office's global temperature forecasts, released today, suggest that 2017 is likely to be one of the warmest on record since 1850. 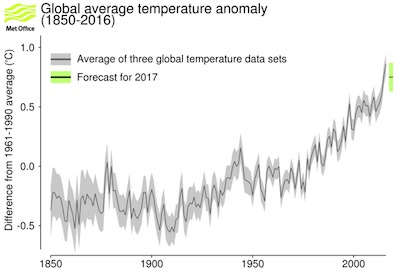 The decision to go ahead with fracking in England will be of concern to many environmentalists, with the Met Office research fellow, Professor Chris Folland, saying: "Increasing greenhouse gases are the main cause of warming since pre-industrial times."
This article appeared in our December 2012 issue of The Actuary.
Click here to view this issue
Filed in
12