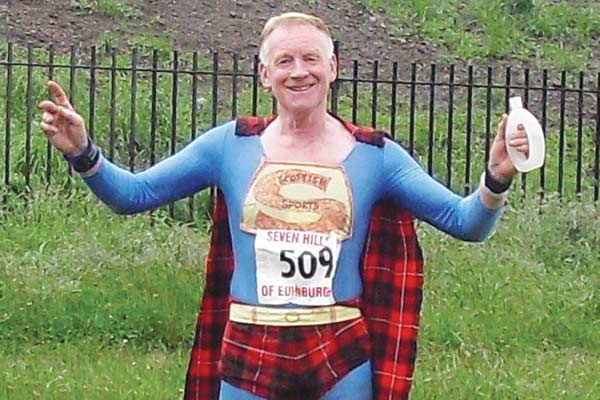 Congratulations to Charles Cowling for completing the 2012 Brathay Windermere Marathon and in the process raising an impressive £12,000 for the Worshipful Company of Actuaries Charitable Trust.

Nearly 800 runners from all over the country took part in the May event, including two members of the armed forces who flew in from Afghanistan.

The course, recently voted the UK's second best marathon by Runner's World magazine, follows a route around Lake Windermere and Esthwaite Water, starting and finishing just outside Ambleside and passing through Hawkshead. The stunning landscape makes it easy to see why the course is so popular, despite its hills! The final climb to a beautiful finish at Brathay Hall overlooking Lake Windermere is a particular killer for tired legs after 26 miles. But the fantastic organisation and the hugely supportive crowds all around the course were a massive help in spurring the runners on.

The winning time was an impressive two hours and 45 minutes. Some way behind, in his first-ever marathon, Charles was very pleased to finish in a respectable four hours and 34 minutes and claimed that, despite far too many hills, he enjoyed the whole experience.

The most impressive feat though had to be the 18 athletes completing the 'Brathay 10in10' - 10 marathons in 10 days, with their final day coinciding with the big race. Their achievements were closely followed by Cumbria Live TV, whose support helped to ensure that the Brathay Trust's campaign to raise money to help improve the lives of vulnerable children and young people was a great success.

Charles's next challenge is a charity coast-to-coast walk next summer through the north Yorkshire moors, Yorkshire Dales and Lake District national parks with fellow members of the Worshipful Company of Actuaries.

To join Charles on the coast-to-coast walk, email [email protected]

If you still wish to contribute to Charles's marathon total, please do so at http://uk.virginmoneygiving.com/charlescowling

The Actuarial Profession's library administrator, Richard Smith, has a new book out.

Richard, who writes for BBC Radio 4's The Now Show, said: "Britain is a nation of good sports, literally. Australia may be good at cricket and rugby, but has that proud sporting nation ever produced a world champion pie eater? (Shane Warne notwithstanding). No! And if it wasn't for the rejectionist Olympics snubbing the sports Britain is truly good at, like Pram Race Pub Crawl, then Team GB would top that London 2012 medal table."

The Worshipful Company of Actuaries (WCA) was among the livery companies invited to attend the Queen's Diamond Jubilee lunch at Westminster Hall on 5 June. The main purpose of the event was to recognise the many charitable activities they support.

Master John Lockyer and senior warden Bill Smith invited Dr Matthew Inglis, who leads the WCA-funded Royal Society project to improve the teaching of mathematics, and charities that the WCA supports, including the Edmonton Sea Cadets. Also present was Ella Spencer, the first recipient of the Phiatus award, which recognises actuaries who have raised substantial sums for charity.

Retired consulting actuary Ronnie Sloan recently completed the 15.5-mile, 2,200ft climb Seven Hills of Edinburgh Challenge to raise funds for Scottish Sports Aid Trust, which gives financial help to aspiring Scottish athletes. Ronnie, who turns 70 next year, won the prize for oldest competitor, pictured here in the tartan Superman outfit he wore in 33 marathons back in the 1980s and 90s. You can still sponsor him at www.justgiving.com/ronniesloan.

LMSG hears why the winner takes all (the flack)

Following a packed house at the last London Market Student Group (LMSG) event in March, the Counting House saw an equally impressive turnout of London's student actuaries in June. The audience were present to hear a presentation on 'The winner's curse and other pricing biases' from Will Forster of Canopius, followed by complimentary drinks later.

The winner's curse describes the phenomenon whereby the bidder who gets the true price most wrong tends to win. Will believes this deepens the market cycle, as in a competitive market it is natural to bid lower, exacerbating the curse.

Estimating claims costs accurately would be one solution. This makes the development of pricing models both important and dangerous. Pricing models support good underwriting, but the potential for model and parameter error for London market business is significant.

Ironman seeks sun next time round

On 17 June, Dan Georgescu (FSA, and senior features editor of The Actuary magazine) joined nearly 2,000 other competitors to attempt the 70.3 mile Ironman triathlon in Exmoor. This event has a reputation for being the 'toughest 70.3 in the world' and was not made any easier by the wet and windy pre-race weather conditions. The route involves a 1.2 mile swim in Wimbleball Lake, followed by a 56-mile bike ride covering 52 hills, and finishes with a punishing 13.1 mile run. Dan completed the race in a gruelling seven hours and 25 minutes, raising over £1,300 for the Motor Neurone Disease Association. He is now assessing the options for completing a full Ironman somewhere sunnier next year.

The Rollo Davidson Trustees give notice of the award of the first Thomas Bond Sprague Prize to P. J. S. Lowth, Clare College.

The prize will be awarded annually for distinguished performance in the master of mathematics/master of advanced studies in mathematics examinations of the University of Cambridge in the subjects of actuarial science, finance, insurance, mathematics of operational research, probability, risk and statistics.

It has been made possible through the enthusiasm of and a generous donation by David Forfar.

The prize commemorates Thomas Bond Sprague (1830-1920), the only person to have been president of both the Institute of Actuaries in London and the Faculty of Actuaries in Edinburgh. Sprague was Senior Wrangler and Smith's Prizewinner at the University of Cambridge in 1853. He became actuary to the Equity and Law life insurance company, and chief executive of the Scottish Equitable Life Assurance Society.

Hannah Chivaka and her husband, Richard, are delighted to announce the birth of their son, Tinashe (pictured left), on 11 May 2012, a baby brother for Faith.

Congratulations also to Scott McKenna (Barnett Waddingham) and fiancée Sara,
who got married on 7 July 2012 at the
Hillbark Hotel, Wirral.

This article appeared in our August 2012 issue of The Actuary.
Click here to view this issue
Filed in
08