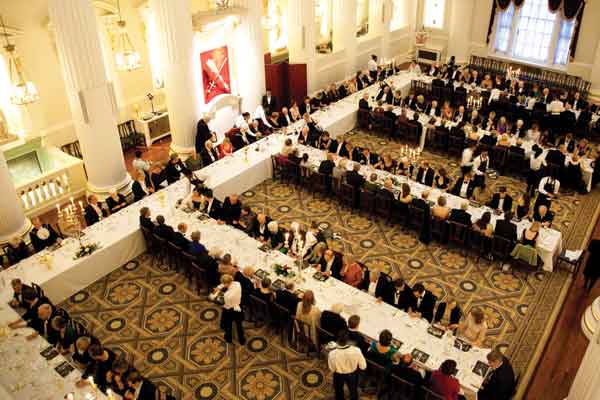 Liverymen of the Worshipful Company of Actuaries (WCA) and their guests gathered at London's Mansion House for their annual banquet on the evening of 24 April.

Guests were serenaded by the orchestra as they entered the hall, and Honorary Chaplin Reverend Canon David Parrott got the evening off to a good start with his witty banter during grace.

A four-course meal was topped off by the customary ceremony of passing the Loving Cup. To complete the official rituals, guests dabbed rose water behind each ear to aid digestion.

Sally Bridgeland, court assistant, welcomed guests to the banquet, weaving between them links of wool, once weighed at Staple Inn, and silk, representing the highest levels of the City's legal profession.

Among those honoured, Holly Smith of the Edmonton Sea Cadets received the Robert Thomas Memorial award, presented by Dr Jo Thomas, for her outstanding contribution during the year.

This article appeared in our May 2012 issue of The Actuary.
Click here to view this issue
Filed in
05
Topics
Professional