28% of Britons over 50 'have no retirement savings'

More than one in four UK residents aged over 50 have no pension plan in place and are set to rely on the state pension in retirement, according to research published by LV= today. 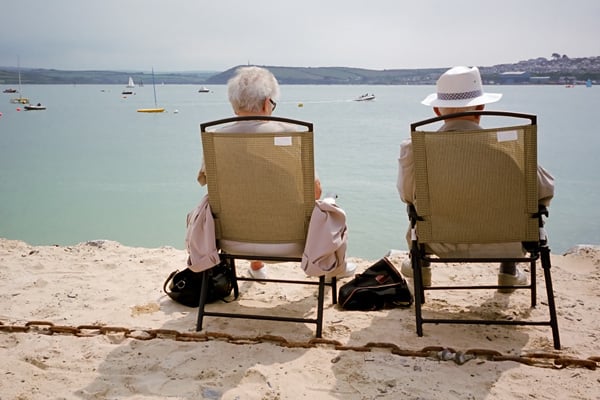 The insurance company's State of retirement report found that 28% of over-50s surveyed had no pension or savings in place. With 22.32 million in the UK population aged over 50, this equates to 6.25 million people - an increase from the 1.2 million people who live solely on the state pension today.

Currently the basic state pension pays people £5,587 a year and averages at £9,672 when additional income such as pensions credit is taken into account. This is up to 51% less than the annual income of someone working full time on the minimum wage, £11,477.

Plans to introduce a universal state pension of £140 a week would still provide an annual income well below the minimum wage and 43% of those surveyed by LV= said even receiving the equivalent of the minimum wage in retirement would leave them struggling to get by.

LV= also found that those who are either retired or within five years of retirement have cut back on their long-term savings in the past year. The average decrease was £3,552 over the 12 months, equal to £8.31bn of 'lost' retirement savings.

Savers into private pension plans made the most significant cuts over the past year, reducing their long-term savings by an average of £523 a month, compared to £164 a month on average by those with public sector pensions.

Ray Chinn, head of pensions at LV=, said: 'It is worrying that so many people are saving little or nothing for their retirement "wages", instead expecting to fall back on the state pension. While working hard up to their retirement to bring home a decent wage, I'm sure many will be disappointed to retire with an income equivalent of less than the minimum wage.

'If more people reflected on their pension as a "wage" that they will potentially be relying on for over two decades, they might feel more inclined to plan ahead.'

Separate research published today by Prudential also found that just 20% of people planning to retire this year have set money aside for any care needs. At the same time, fewer than half of those surveyed in the insurance company's Class of 2012 research had planned for potentially needing more income in retirement as they get older.

Vince Smith-Hughes, retirement expert at Prudential, said: 'People retiring this year realise that living longer may mean they will need a higher income as they get older, but few of them have made the connection between the risk of ill-health and needing money to pay for healthcare.'

He added: 'Making financial provision for the possibility of ill-health in retirement should be an integral part of the retirement planning process.'

The government is currently considering last year's recommendations made by the Dilnot Commission on the Funding of Care and Support. This proposed that an individual's contributions to their care should be capped at £35,000 with additional costs would be funded by the state.

This article appeared in our May 2012 issue of The Actuary.
Click here to view this issue
Filed in:
05
Topics:
Health care