Bank of England opens its doors to the Worshipful Company 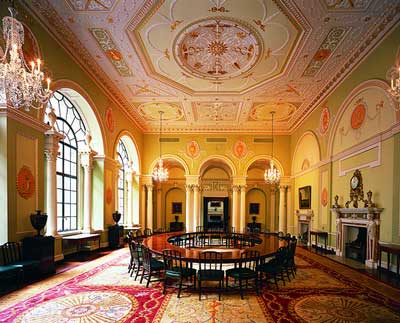 A group from the Worshipful Company of Actuaries was lucky enough to have a tour of the Bank of England on the evening of 10 February with curator John Keyworth.

The Bank arranged the 90-minute tour as a special event, providing access to the working areas of the bank, beyond the museum section usually accessible to tourists.

The evening was fascinating, with something to suit all interests: art, architecture, bronze, visits to the Court Room, and to the Committee Room (where the Monetary Policy Committee meets, making decisions that ultimately influence some fundamental actuarial assumptions).

Sadly, we were unable to enter the Governor's parlour, as the Governor and his staff were still in situ late that evening.

Our guide had a seemingly limitless knowledge of the Bank and even explained how quantitative easing is far from new.

When the French invaded Fishguard in 1797, there was a run on the Bank of England. The response was to introduce £1 and £2 notes, printing money in denominations smaller than previously available. However, the temptation to forge the new bank notes proved great, even though forgery was a capital offence. Three hundred forgers were executed.

On a cheerier note, we were shown a cartoon (also from 1797) - edgy satire surprisingly not out of place in the 21st century - which led to the bank's nickname of The Old Lady of Threadneedle Street.

Attention was drawn to the plaque in memory of the youngest secretary to the bank, Kenneth Grahame, also the author of Wind in the Willows.

History and curiosity aside, the Bank is a working entity. Security was visibly present, but not as overbearing as would be expected for the world's second largest store of gold bullion, after Fort Knox.

Suffice to say, the group was not taken anywhere near the gold, where - no doubt - the security is several degrees tighter.

Surely, such a large, imposing building, must have been damaged during the bombing raids of World War II? Well, yes, but not as you might expect. A stray anti-aircraft shell, fired from Ealing, landed on the roof, causing a burst pipe and flooding. Other than that, there was no damage!

Everyone agreed that the tour of such a formidable establishment was a real pleasure.