The launch of the new-look The Actuary magazine, website and jobsite was marked by a special event held on Wednesday at Staple Inn in London.

Representatives of SIAS and the Actuarial Profession were joined by actuaries and members of organisations who have supported the magazine to witness the unveiling of the first issue of the publication since it moved to Redactive Media Group.

Speaking at the event, Derek Cribb, chief executive of the Institute and Faculty of Actuaries, highlighted the team work involved in producing the magazine and the important role it plays in enabling the profession to discuss important issues.

'The production of the magazine is a team effort. I look forward to getting this right and getting a quality magazine out for all the members,' he said.

Frank Oldham, chairman of SIAS, noted how far The Actuary had come since SIAS first launched its predecessor, Fiasco, in 1978. He said the magazine's ABC circulation of 22,764 was 'testament to our pull worldwide', as it 'provides a valuable service for actuaries'.

Mr Oldham set his sights on the magazine's circulation reaching 30,000 within the next decade. 'I am confident its popularity will continue to grow in new hands,' he said. 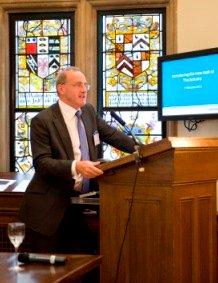 Redactive's Joanna Marsh said the company was committed to continuing the 'good work' that had been done with The Actuary in the past. Redactive is committed to 'upping the quality' in terms of content, as well as giving the magazine and website a 'contemporary feel', she said.

The February 2012 issue also represents the first edition of The Actuary with Deepak Jobanputra in the editor's post. Describing the magazine as the 'authoritative voice of the profession', he said: 'We have a great opportunity through the magazine,  the website and events to get our message across.'

Mr Jobanputra also noted the global reach of the magazine, with 40% of the Profession's members based overseas. The actuarial profession is one of the leading global specialisms based in the UK, he said.

Stating an ambition to see actuaries recognised globally as experts in risk management, he added: 'It's never been a more exciting time to be an actuary.'

The new-look magazine received a positive response from attendees at Wednesday's event. Chris Worsley, marketing director, risk and financial services at Towers Watson, welcomed its 'lively' appearance, while the layout also won praise from SIAS social convenor Mark Dainty. As a director at High Finance Group, he also described his experience of working with Redactive as 'great'.

Margaret de Valois, director of the global pensions and investment advisory team at Mazars, and a former editor of the publication, said the new look showed the journey that magazine had made over recent years. 'We've come a long way,' she said.

Her sentiments were echoed by Paul Shelley, policy manager at the Institute and Faculty, who described the magazine as 'crisper' and added: 'It's building on what we had before, it's refreshing something that was doing a good job.'